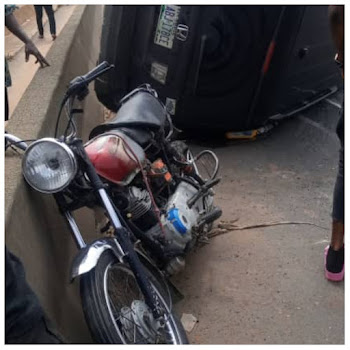 A commercial motorcyclist and his passenger have been crushed to death by a speeding car along the Lagos-Ibadan expressway, Ogun State.

Saga Gist reports that the crash occurred around Conoil axis of the highway, at about 10:55am on Sunday.

The Federal Road Safety Corps (FRSC) confirmed that a total of three male adults were involved in the incident.

Florence Okpe, who is the FRSC spokesperson in Ogun State said: “Unfortunately, two of them were killed in the crash, while the third person was unhurt.

The crash, according to Okpe, involved a Honda Pilot car, with registration number ABJ178CE and a Bajaj motorcycle marked AAA213QM.

“The suspected cause of the crash was excessive speed, which led to loss of control as the Honda Pilot driver hit and killed the rider and his passenger,” Okpe said.

She disclosed that the bodies of the two victims had been deposited at Idera Mortuary in Sagamu.

While commiserating with the families of the deceased, Umar urged them to contact the FRSC office in Sagamu for details of the crash.