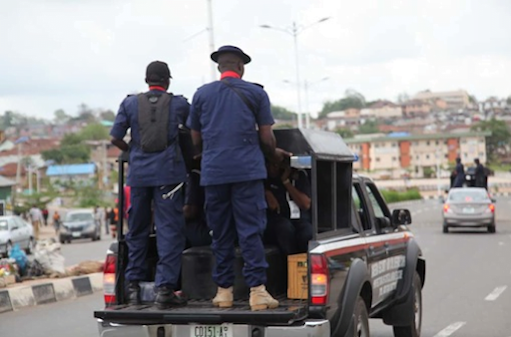 An examination officer alleged to have defrauded secondary school students of over N1 million in Taraba State has been nabbed by the state command of the Nigeria Security and Civil Defense Corps (NSCDC).

The examination officer was said to have defrauded the students of Government Day Secondary School Appawa, in Lau local government council, of the amount for the National Examination Council (NECO) registration.

Parading the suspect before media practitioners on Wednesday at the command state headquarters in Jalingo, Commandant Ugwuja Edwin said the suspect was nabbed following a tip-off from some members of the community.

Also paraded with the examination officer were seven other suspects arrested in connection to crimes ranging from vandalization of electricity cables to motorcycle theft.

Giving a vivid account of how the suspects were arrested by the men of the command, he vowed that the command would not rest on its oars until hoodlums are flushed out of the state.

While the seven suspects were said to have been “involved in vandalising electric appliances, motorcycle theft, rape” the “exam officer of Government Day Secondary School Appawa” he said “defrauded students of over one million naira for National Examination Council, NECO registration.”

The Commandant assured Tarabans of their effort towards combating crime in the state and called on them to report any suspicious person to the command.

Stressing the command’s readiness and determination to continue to collaborate with other sister security agencies, he urged the public to reciprocate by providing useful information that would assist security personnel to track down the undesirable elements in their hideouts.

The suspects blamed the bad economic situation in Nigeria for their crimes. They pleaded with the security agency to give them a second chance.