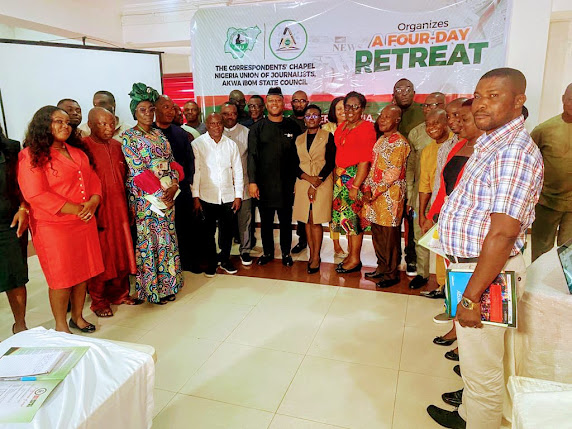 It urged members not to be discouraged but rather should set an agenda for transformational leadership ahead of the 2023 general election for a better Nigeria.

Chairman of Akwa Ibom State chapter of NUJ, Comrade Amos Etuk, stated this while delivering a goodwill message at a four-day retreat in Abuja hosted by Akwa Ibom State Correspondents’ Chapel with the theme: “2023: In search of A Better Nigeria Through Responsible Journalism.”

According to the NUJ boss, “The politicians seeking our votes have dismissed our relevance, they forget that all of us seated here today and millions across 774 Local Government Areas in the country are the structures needed to give our country the best in the next few months.

“But, we must set an agenda for good and transformational leadership. We must write with boldness, resist the current attempts to lay siege against the media, we must insist on a free press all within the boundaries of the ethics of this well-respected profession.”

Earlier, chairman of Correspondents’ Chapel, Comrade Idongesit Ashameri, in her welcome remarks pointed out that the retreat was to remind Journalists of their role in holding political leaders accountable and reminding them of their electioneering promises to the people.

Ashameri regretted that most journalists are quick and thrilled to give the best colouration and in the most appealing ways to such promises by politicians which sadly most of them fail to fulfill.

“But the question is how often do we consciously remind governments at all levels of the need to ensure a congruence between their policies and programmes in office with the electioneering promises earlier made to the electorate through our various media organisations.

“Gentlemen, this is where our responsibility comes in. This outing is therefore designed to afford us the opportunity to retrain our members on the rudiments of responsible journalism especially as the general elections approach.

“It is our expectation that carefully selected world-class scholars, captains of industries, core professionals and enthusiasts in their various fields would drill us and do justice to this timely theme. We have no doubt that this outing would also afford us the opportunity to be re-equipped with techniques and skills on how best to track, consciously remind and hold the government accountable to its electioneering promises.”