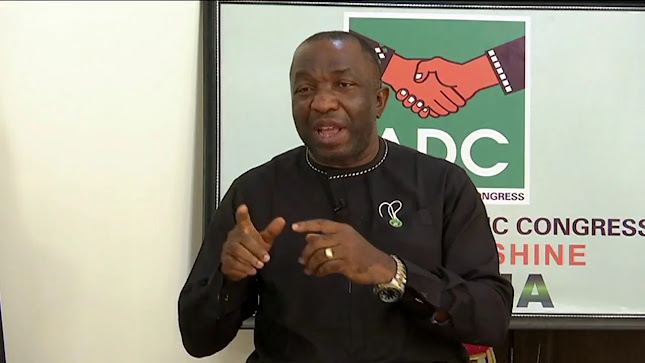 Twenty-seven state chairmen of the African Democratic Congress, ADC, have called for the resignation of the National Chairman, Ralph Okey Nwosu.

In what can be described as a mild drama on Wednesday evening at the ADC national secretariat in Abuja, party men called for the resignation of the chairman, claiming his tenure had expired according to the party’s constitution.

The Chairman of the Kogi State chapter of the party, Kingsley Temitope Ogga, while addressing newsmen shortly after the party’s National Executive Council, NEC, meeting in Abuja, said Nwosu has been the party’s Chairman for 17 years and has overstayed his tenure.

Ogga said following the expiration of Nwosu’s tenure in office, a caretaker committee is to be sworn in to pilot the affairs of the party.

His words, “I’m the one that called for a NEC meeting and I told the chairman, he said it was a welcome idea.

“But to my surprise, before 11am, due to some logistics some of our chairmen can’t fly all the way, some are coming from Sokoto. We now said they should give us time, like two hours, which they did.

“By the time we came, they had locked the door, they didn’t want to allow all the chairmen to come in, they only allowed me to come in and when I saw my other chairmen standing outside, I had to go back and ask them to come in.

“When they even allowed us to get in, there were no seats for the Chairmen. They only gave me a seat, I said I cannot sit down when my chairmen are standing. And I looked at the congregation, I saw people who are not even members of the party, thugs.”

When asked what the chairmen demanded, he said, “We are standing by our resolution that there’s no way that the NEC has decided the tenure of the National Working Committee, their tenure has expired and should remain dissolved.

“What we are asking for is that a caretaker committee be put in place and we give them time, within one month, we conduct national convention. The tenure is expiring on the 28th of this month.

“For good 17 years, he has been the National Chairman and constitutionally it’s not right. We don’t want this party to crumble. They rated us as the third force. But now, the way they are handling this party, they are trying to kill it. Go to Kogi State and ask of ADC, we have a sitting House of Reps member, we have been doing well in our federal constituency.”

But reacting to the development, the Chairman of ADC, Chief Ralph Okey Nwosu, said the party cannot afford to host another convention, saying that the focus of the party is the 2023 general elections.

“We’ve held the NEC, the NEC meeting has resolved that because of the election coming, we cannot afford to hold another convention at this time for the interest of the party. We now decided to focus on our campaign, we don’t want any fragmentation. And that the convention will come a year after now. The NEC all seated were in support.

“The NEC constitutes the National Working Committee members, the Zonal chairmen and all the national officers. We had a very cordial meeting. You know we are an emerging party, people are scared of our energy, therefore it’s possible that some people are being sponsored.

“Within the next 48 hours, we will get you intel of how money moved around to disrupt ADC.

“This is a major NEC. Before we did our Presidential primaries, we had almost 12 aspirants running under ADC. By the time we finished, it became a big problem. We had to set up a committee upon the committee to start the process of reconciliation, up till now we are still on it.”

Nwosu boasted that the party would churn out at least 15 governors, 60 percent of National and State assembly members, as well as getting its Presidential candidate, Dumebi Kachikwu to the Villa.

“We want to run our Presidential, state, National and State Assembly elections without any problems, we believe we are headed for the Villa. Whoever is trying to sponsor anything in this party will fail I can assure you.

“No matter the people causing problems in ADC, this is our time and we will have it by the grace of God.”