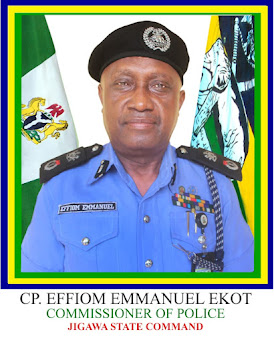 The spokesman of the Command, DSP Lawam Shiisu Adam confirmed this in a statement issued to newsmen.

Effiom assumed duty as substantive Commissioner of Police, Jigawa State command on the 29th of September, 2022.

He took over from CP Aliyu Sale Tafida following his retirement from service.

The new Commissioner of Police, Effiom was born on 3rd March, 1964, in Nko Yakurr LGA of Cross River State.

He holds a Bachelor’s degree in English from the University of Port-Harcourt in 1986.

CP Effiom was enlisted in the Nigeria Police Force as a Cadet Assistant Superintendent of Police (C/ASP) on the 3rd of March, 1990.

He has served in administrative, investigative, and operational capacities within the State Commands, Zonal Commands, Formations, and the Force Headquarters Abuja.

Before his posting to Jigawa State Police Command, he was the Deputy Commandant, Police Academy Wudil Kano.

The CP has several certificates in Public Relations, Management and Strategic Security Courses, among others.