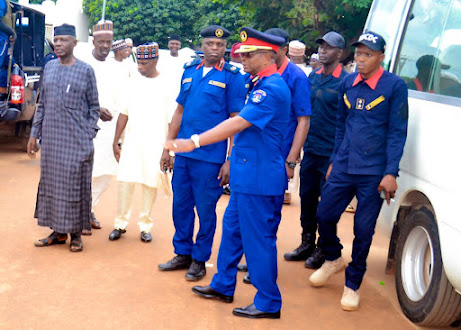 Residents of Kabala costain, Kabala Doki and Kigo Road in Kaduna-North and Bashama Road in Tudun-Wada, Kaduna-South, on Friday, called on the state government, and the federal government to urgently come to their aid as the river Kaduna reportedly fills to capacity.

The communities claim the flood was imminent in the community following the overflowing of its banks by the river.

Speaking to Journalists in Kaduna on Friday, the leader of the communities, Ibrahim Musa Yakodo said the communities need urgent government assistance to relocate them to safer places.

He said most of them living in the communities are landlords who cannot afford to rent houses elsewhere, making it impossible for them to relocate.

” Every year, we face this horrible experience of flooding. We cannot afford money to relocate to safer places. Our tenants have relocated, leaving us with our buildings. We need government assistance now,” he said

Saga Gist recalls that the Kaduna State Commandant, Nigeria Security and Civil Defence Corps (NSCDC), Commander Idris Yahaya, had placed its personnel in the Disaster Management Unit and residents on red alert over an impending flood.

Following this, Commander Idris Yahaya had directed the Disaster Management Unit, Divisional Officers in charge of Kaduna-North, Kaduna-South, Chikun, and Jema’a to ensure swift action towards mitigation or ameliorating the situation.

He also tasked residents of Kabala costain, Kabala Doki and Kigo Road in Kaduna-North, Bashama Road in Tudun-Wada in Kaduna-South including communities around the river bank such as; Nasarawa and Keke B, Tudu Mashigi, Kurmi and Doka Mai Jema’a in Chikun Local Government Area to adhere to the warning by taking precautionary measure and relocating from those highly vulnerable locations.