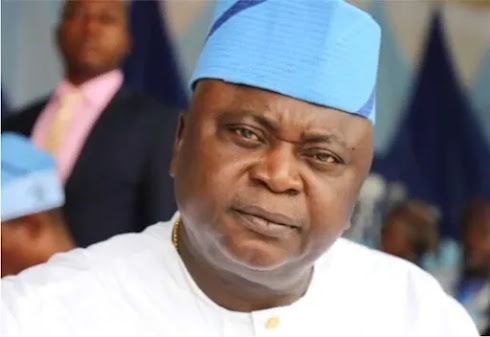 The governorship candidate of the Peoples Democratic Party (PDP) in Ogun State, Ladi Adebutu has said a chieftain of the party, Segun Showunmi, did not partake in the governorship primary election.

Adebutu wondered how an aspirant would go to the NUJ Secretariat, Iwe Iroyin in Abeokuta to declare himself the candidate of the PDP in Ogun.

The governorship candidate stated this while addressing defectors at a meeting held in Abeokuta, Ogun State.

He said Showunmi, without participating in the primary election, went on air to claim victory in an election he was never a part of.

He said the Egba chief also made use of social media to describe himself as the governorship candidate of the PDP in Ogun.

“It is surprising that someone who did not participate in the primary with us in any way went on national television to declare himself the winner. He didn’t take part in the primary at all. He went to Iwe Iroyin. He didn’t contest the primary election with us.

“But this is the time of social media. Once anybody can buy small data, they go online and call themselves whatever they like. And social media is strange. Once something goes online, people will assume it is the truth.

“Recently there was a meeting at Vice President Atiku Abubakar’s residence with governorship aspirants. I could not go to that meeting because my stomach was acting funny. The next thing we saw on social media was the noise that I was not invited to the meeting because I was not a candidate. The same Atiku residence I can go to any time. I do sleep there. I can summon a meeting there tomorrow morning. Atiku has spent days with me here in Ogun State. If he is not busy, I can bring him here.

“One cannot attend all meetings. If there is a meeting, I will go if I’m not busy but if I’m busy with you, I won’t go. Segun Showunmi can go if he wants to,” Adebutu said mockingly.

Adebutu also accused a governorship aspirant of the party, Jimi Lawal, of seeming anti-party activities, saying he was seen hobnobbing with members of the All Progressives Congress (APC), the party of his principal, Governor Nasir El-Rufai of Kaduna State.

Saga Gist recalls that Showunmi, on May 25, held a parallel primary at the NUJ Secretariat in Abeokuta without the attendance of the officials of the party and the Independent National Electoral Commission (INEC).

The same day, the PDP panel from Abuja, under the supervision of INEC officials conducted a primary election, which was won by Adebutu.

Our correspondent reports that the electoral umpire has published Adebutu’s name as the candidate of the party in Ogun.

But, Showunmi has continued to address himself as the candidate of the PDP, expressing optimism that the court would perfect his candidacy soon.