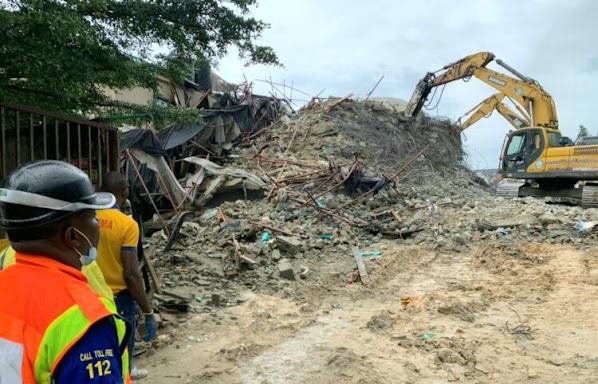 The building collapsed in Oniru again brings to the fore the seeming laxity of the Lagos government in enforcing the laws governing construction.

The seven-storey structure collapsed in the early hours of Sunday on Oba Idowu Oniru Street, near Palace Road in Oniru.

Already, two bodies have been recovered by emergency responders and taken to the morgue; the search for more bodies and possible survivors continues.

Speaking at the scene, Commissioner for Physical Planning, Idris Salako revealed how the developer chased away State officials at different times.

Salako told reporters that the site had been sealed thrice but the owner shunned warnings and resumed work.

“We have a developer that is hostile and who contravenes the law of the Lagos State Urban and Regional Planning, 2019, as amended”, he said.

The commissioner confirmed he did not get the necessary planning permit and the prerequisite authorization before the start of construction.

“Several times, the officers of the Lagos State Building Control Agency visited this site and the attitude of the contractor has been that of hostility,” he said.

Salako added that the owner has been using his personal security to stop them from carrying performing their job.

“The developer has been dropping names any time our officers visit the place; we have sealed the site three times and he kept breaking the seal,” he added.