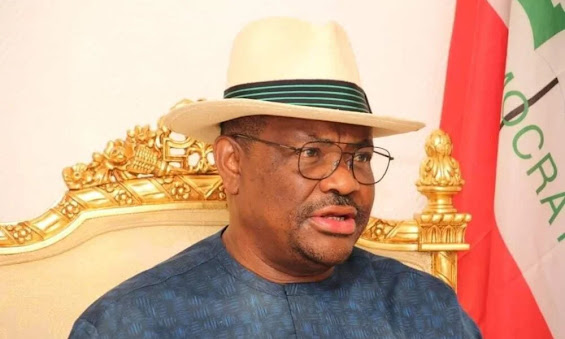 The Rivers Governor, Nyesom Wike has described the resignation of the Peoples Democratic Party (PDP), Board of Trustees (BoT) Chairman, Senator Walid Jibrin as an insult to the Southerners.

Jibrin resigned Thursday during the BoT meeting in Abuja.

Wike spoke at the inauguration of the Ahoada campus of Rivers State University, Thursday.

He said “some people say Wike wants to destroy the party because he lost the election primaries. These people are sick in the head, we are done with Presidential primaries and are over. For God’s sake, in a contest there must be a winner, there must be a loser. I have no regrets.

Wike continued “I told Nigerians before that at the appropriate time i’m going to speak, so let me reveal it small to you so that you people know the kind of country we are and you will begin to ask yourself, am I part of this country?

“Ayu said he will resign if a northerner emerges as PDP Presidential candidate. When the Northern PDP caucus met in the house of the Bauchi State Governor, Bala Mohammed in Abuja he said so.

“After the National Convention, the candidate of the party came to see me in my house in Abuja on Monday around 10:30 am, he told me that I want us to work together and then he said Ayu must go. I asked why, he said because, when a candidate comes from the North, the Chairman of the party will come from the South.

“So, all am saying is that implement what you told me. What offence have I committed? It is not about Wike, it is about the integrity of people who want to lead us.

“I challenge the PDP Presidential candidate to deny this. If he denies this, I will go further to say things to Nigerians. Because enough is enough.

“They told the Chairman of the PDP BoT to resign, who is talking about the Chairman of BoT? What is the role of the BoT? BoT is an advisory body, BoT is not a decision-making body.

“As it is today, it is the Chairman of the party, Presidential candidate and President as the case may be, that will sit down and take a decision. And the Chairman is from the North, and the candidate is from the North, so who will represent the South in decision-making? It is not about me, will I be Chairman of a party? All am asking for, you have taken the President, yes, but you can’t take the two major positions. You can not do that.

“What has killed Nigerians are leaders who don’t have integrity, they don’t do what they promised to do. Look at the insult, you have told the PDP BoT Chairman to resign, so you know and now agree with us that these two can not be in one place. But what we are saying is that the position we all agreed on is Chairman of the party, not the BoT.

“One time General and the candidate went to see the BoT Chairman and said resign, we will give you an advisory role. The BoT is advisory, so what advisory role are you going to give? That is to insult us. Wait let them win, then you will see.