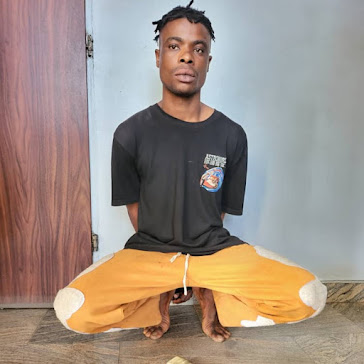 Patrol team attached to the Warri Area Command of the Nigeria Police have arrested a twenty-year-old suspected cultist, Conference Nyerhovwo who was on a revenge mission for the murder of his elder brother, Ovie Nyerhovwo.

The Police also recovered one locally made cut-to-size double barrel shotgun and four rounds of live cartridges from the suspect who is an indigene of Jesse town in Ethiope West Local Government Area, Delta State,

He was carrying a bag in a commercial tricycle when the Police stopped and subjected him and the bag to a thorough search wherein the items above were recovered from him.

He was arrested and taken to the Area Command.

He said, “Investigations later revealed that the suspect was on a revenge mission, claiming that some suspected cultists murdered his elder brother named Ovie Nyerhovwo, he further stated that he contacted his friend who lives in Ghana to tell him where he hid his gun.”

According to him,”He was on his way to carry out the act, when the Police intercepted him and recovered the gun. Investigation is ongoing.”