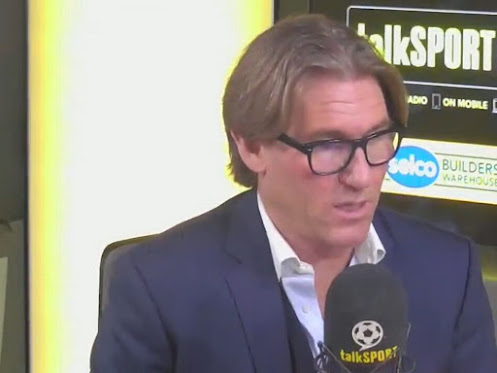 Former Crystal Palace Chairman, Simon Jordan has said those calling for the continuation of football events for the weekend, despite the death of Queen Elizabeth II, are only thinking for themselves.

Jordan insisted that leaving this weekend without sports activities in the United Kingdom was the correct call.

The sports world is on pause to mourn the Queen who died on Thursday at the age of 96 at Balmoral.

The Premier League confirmed that this weekend’s fixtures will be postponed “as a mark of respect to Her Majesty Queen Elizabeth II”.

Manchester United went on with their Europa League against Real Sociedad on Thursday a few hours after the passing of the monarch and fans saw it as an avenue to pay their tributes.

Pundits and football lovers such as Morgan and Nevile feel that match venues would present a chance for fans, teams and players to pay fitting tributes to the late monarch.

But Jordan said on talkSPORT, “I think it’s about right,” said the White and Jordan host.

“In other areas of commerce, for example, Selfridges have decided to close for today but will open again tomorrow but I think sports has a very different dynamic.

“There is an element that you want society to go on and look forward to. We have a new King coming and this is the natural order of events, but it is also a unique and unprecedented set of circumstances – we have lost our Queen of 70 years.

“Some people will want the distraction or want the games to go ahead… there will be people who have spent money on train fares and hotels, and I could say that they are only thinking about themselves, or perhaps it’s a fair point.

“But there are certain events and moments in time where you just have to stand back and nothing takes precedence, nothing becomes more important.

“So I think it’s absolutely right that the initiative from the government is ‘we’ll leave it with you, but we kind of expect a mature, sensible and reflective attitude’.

“Not everybody in the country supports the monarchy but the bulk of people do and it means a lot to a lot of people.

“So while we saw the reaction from West Ham during the game where they sang God Save the Queen and there was an enormous outpouring of emotion, I think it’s appropriate that the nation stands back from this moment and reflects without distractions.

“And we can live without it. I think this is a moment in time where you have to say, ‘no balls get kicked, no balls get bowled, no punches get thrown, and the nation steps back and reflects.”