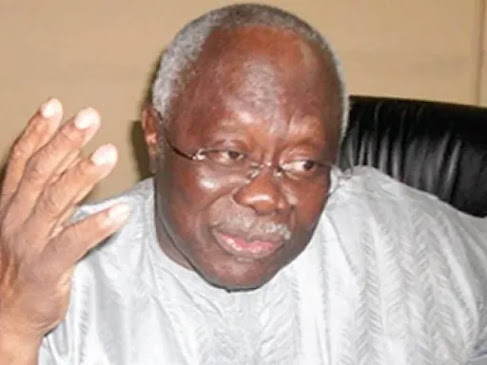 The leadership of Northern Youth Council of Nigeria (NYCN), has described the allegation of Chief Bode George slapping the Adamawa State chairman of the Peoples Democratic Party (PDP) as an attempt to cause unnecessary confusion in the party.

The group lamented that the allegation is also meant to question the integrity of Bode George as an elder statesman that has and still contributing positively to the development of the party and Nigeria as a whole.

Isah Abubakar, the National President of the group in a statement said, “The leadership of Northern Youth Council of Nigeria is shocked with the allegation in disbelief of the personality of Chief Bode George that he slapped the Adamawa state Chairman of PDP, Barrister Abubakar Tahir Shehu. Chief Bode George is an elder statesman and respected personality who without any doubt will not involve himself in any kind of malicious activity that will dent his personality and that of his huge followers across the country.

“The forum, therefore, wishes to urge the general public to disregard the false information and sees it as another way of bringing the integrity of the elder statesman to disrepute. Chief Bode George as is known to all Nigerians is a man of honour whose contribution to the development of the country is second to known.”

The youths opined that a thorough analysis of the elder statesman shows that Chief Bode George has stood to defend the integrity of Nigeria and has throughout his life been at the forefront of ensuring that the right thing is done and has never hide himself to saying the truth of any issue that concern the wellbeing, peace, unity and development of the country.

As such, the youths added that the elder statesman has not been found in his usual character making false allegation or anything wrong against anybody or group of people in any part of Nigeria but as a mature personality, his views to all Nigerians irrespective of political affiliation, tribe or religion has been to put the records straight on anything meant for the overall interest of Nigerians.

“As one of the founding members of the People’s Democratic Party (PDP), Chief Bode George is after seeing the PDP is victorious in 2023 General Election and anything short of that I am sure he will never be part of it, Chief Bode George who is funding many youth organizations in support of the PDP will remain resolute to seeing his party win the election and ensuring that the main opposition party, PDP emerged victorious from the presidency to all levels of elective positions in the country,” the statement explained.

The youths called on the general public to note that Chief Bode George’s priority is to see Atiku Abubakar win the general election and by extension ensure the victory of the party in all the states of the Federation so that the party will restore Nigeria back to its old glory.