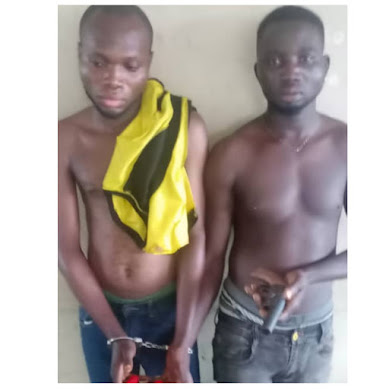 For over a month, the State Commander of the agency, Commander Soji Ganzallo, had directed that “the miscreants disrupting the peace of Atan and its environs” should be hunted and brought to book within two months.

At about 10:47pm on Saturday, the patrol team of the So-Safe Corps apprehended two of the robbery suspects.

The corps spokesman, Moruf Yusuf, identified the suspects as Isaac Bankole, who resides behind Yah Lateef Area, Onibuku and Agboola Ahmed, a resident of Orile-Gboko, Lusada, all in Ado-Odo/Ota Local Government.

According to Yusuf, the duo were arrested while strategizing to rob Sokenu community in Atan.

“In preparation for the planned deadly robbery attack, the culprits robbed an Okada rider of his Bajaj motorbike and instructed him at gunpoint that he would be with them throughout their operation for easy movement from one place to the other,” he explained.

He spoke further that the robbery syndicate had confessed after their arrest, without any form of torture.

“They confessed to the crime and added that their membership of Eiye confraternity gave them the effrontery to strike anytime without the fear of any law enforcement agencies,” he said.

Meanwhile, the Corps Commander, Ganzallo, has instructed that the So-Safe team in Agbara should intensify coded efforts in getting to the root and the likely places of hibernation of members of any cult group, who are using their weapons to unleash terror and threaten the peace of the citizens of the State.

Items recovered from the suspects are: a Bajaj motorbike marked AYE 009 VW; one cut-to-size locally made pistol; two life cartridges; one ATM Card; one small Itel phone; one Tecno Spark 7 and various types of charms.

Yusuf added that the two suspects, their victim and the exhibits found on them have been transferred to the Nigeria police in Atan division for further investigation and likely prosecution.