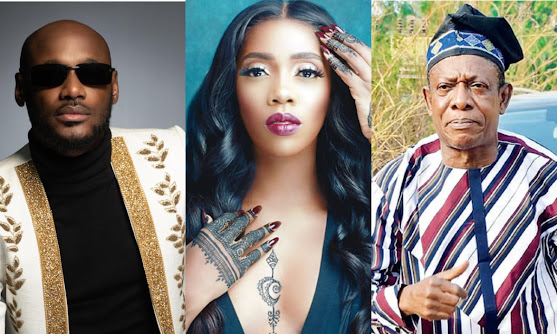 Ahead of the 2023 presidential election, several music, movie and comedy stars are working to ensure that their preferred presidential candidates clinched the top position in the country. However, some of the top stars seem to be sitting on the fence.

Saga Gist reports that most celebrities who decided to show interest in the forthcoming presidential election are either supporting the All Progressives Congress, APC, flagbearer, Asiwaju Bola Tinubu or the candidate of the Labour Party, Peter Obi.

Some of the celebrities were conspicuously seen during recent rallies for Obi and Tinubu in Lagos State.

Despite a warning issued on September 24 by the leadership of the Actors Guild of Nigeria (AGN) declaring that its members endorsing political candidates are not representing the interest of the organisation, many actors have continued to sell their candidates.

Recall that Nollywood actors, John Ikechukwu Okafor, popularly known as Mr. Ibu, Harry B Anyanwu and others had prior to primary elections, endorsed the former Lagos State governor.

A video on social media showed the duo openly drumming support for Tinubu, saying he has really impacted on people and deserves to be president of the country.

The comic actor, Ibu was, however, slighted with Peter Obi during a rally in Jos, Plateau State a few months ago, also drumming support for the former Anambra Governor.

Several performing artists, including Zark Orji, Jide Kosoko, Gentle Jack, and about 21 other actors were listed in the 422-member Presidential Campaign Council of the ruling party.

Peter and Paul Okoye of the P-Square and other music stars have openly declared support for Obi as they continue to mobilize support for him.

Aside the singer and DMW boss, David Adeleke, popularly called Davido who played a great role in the emergence of Ademola Adeleke as the Osun State Governor recently, some top celebrities, including Innocent Idibia, popularly known as 2face, Tiwa Savage, Ayodeji Balogu, known as Wizkid and others have remained silent.

However, an Abuja-based music producer, John K., who spoke on Thursday, said Davido may be working for Atiku Abubakar, the presidential candidate of the Peoples Democratic Party, PDP.

“Davido is a PDP supporter and we don’t expect him to be working for a candidate of another party. He is very close to Atiku and he can’t leave him for another candidate,” he said.

Mr John called on Nigerians to ensure that they vote intelligently in 2023, stressing that any mistake by the electorate may cost the nation another four years of stagnation.

“For me, I am Obidient but I pray we don’t vote for the wrong people this time because Nigeria can’t afford to make that mistake again. It is time to take back our country”, he said.