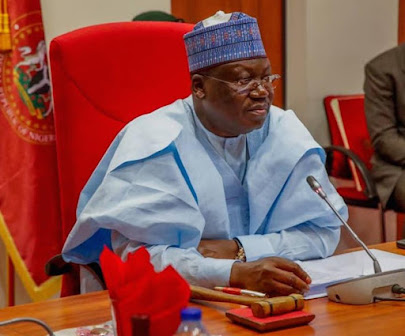 The President of the Senate, Ahmad Lawan, has proffered suggestions on how to reverse the increasing trend of deficits in the nation’s budget.

Lawan made the suggestions on Friday in his welcome address at the 2023 budget presentation by President Muhammadu Buhari.

The Senate President told Buhari shortly before he presented the 2023 budget proposals to a joint session of the National Assembly that “our economy is still challenged by dearth of revenues.

“The main source of revenue to the Nigerian Government is Oil and Gas. We always consider the diversification of the economy as crucial, and it’s indeed crucial.

“The idea of deploying our revenues from the Oil and Gas to support the diversification into real sectors like Agriculture, Manufacturing, Mining, etc is now under serious threat.

“The large scale and massive stealing of our oil is concerning, as this drastically reduces the revenues available to the government.

“With conflicting figures, projections have put our losses from this malaise at between 700,000 to 900,000 barrels of crude oil per day, leading to about 29 to 35 percent loss in Oil revenue in the first quarter of 2022.

“This represents an estimated total fall from N1.1 trillion recorded in the last quarter of 2021 to N790 billion in the first quarter of this year.

“Mr. President, I consider the Oil thieves the worst enemies of our country. The thieves have declared war on our Country and our people.

“I strongly feel that if we do not take the necessary measures to stop the thieves immediately, our economy will be devastated, as efforts to provide infrastructure and diversification of the economy would both be thwarted. It is time to take drastic and desperate measures against the thieves.

“Mr. President, the situation becomes more unfortunate if we factor in the Budget deficit estimated at N7 trillion and the grim prospect of its increase to about N11.30 trillion as presented in the 2023 – 2025 Medium Term Expenditure Framework / Fiscal Strategy Paper (MTEF/FSP).

“Your Excellency, we can reduce the deficit by stopping the theft. We can also consider other options to source more revenues for government.

“I believe that it is imperative to review the waivers and concessions government has granted to the tune of Six Trillion Naira. In a difficult time like this, some of the waivers may no longer be justified.

“In the same vein, we should consider taking off some of the major revenue generating agencies from direct funding by placing them on cost of collection of revenues, as we did for Federal Inland Revenue Service (FIRS), Nigeria Customs Service.

“In this regard, agencies like Nigeria Ports Authority, (NPA), Nigeria Communications Commission, (NCC), Nigeria Maritime Administration and Safety Agency, (NIMASA), etc can be given encouraging cost of collections of revenues.

“The National Assembly Committees on Finance and the Federal Ministry of Finance, Budget and National Planning should jointly look into this matter immediately.

“The condition would require courageous fiscal policy to redress, by reducing the deficit, not just to avoid further increases in our debts, but to ensure macro-economic stability, grow confidence in the system, and guarantee sustainable economic growth.

“The National Assembly will support policy frameworks geared towards prudence, transparency and accountability through rigorous appropriation.”

Lawan also called for the completion of the ongoing legacy projects of the Buhari government.

“Mr. President, I strongly believe that the 2023 Budget should target at completion of ongoing projects, especially our legacy projects.

“This is not only because of the importance of infrastructure to the stimulation of economic activities but also to entrench the efforts as a legacy of this administration.

“Our focus on this sector has been exemplary, and the benefit to our growth and development cannot be overstated.

“Mr. President, we note the government drive to address the impact of climate change and reverse its effect. Though complicated and dynamic, we should not rest on our oars in dealing with issues like, floods, drying wetlands, desertification, and coastline erosion.

“The menace of flooding in many parts of our country has been particularly worrisome. It has devastated homes, and disrupted families, lives, and livelihoods. We will need to take proactive measures to tackle this and especially manage our Dams and other water bodies to curtail the menace of flooding, now becoming a national disaster.

“Our focus and targets should be on how to prevent these annual floods from occurring in the scale that we experience annually. This year, the floods have not only devastated families, but also destroyed our infrastructure, roads particularly.

“Mr. President, from the assessment of the prevailing situation our security agencies are recording more successes and the situation is improving.

“In pushing for concerted efforts toward ridding our nation of criminals, the National Assembly will continue to support the Executive arm of government in finding permanent solutions to insecurity in our country. I also commend our defense and security forces for working harder. There is still some work to do.

“Mr. President, be rest assured that Distinguished Senators and Honourable members of the ninth National Assembly will once more begin work on the 2023 Budget immediately.

“As usual, we shall be guided by an utmost sense of duty, responsibility, equity, fairness, justice and patriotism, in the interest of posterity.”