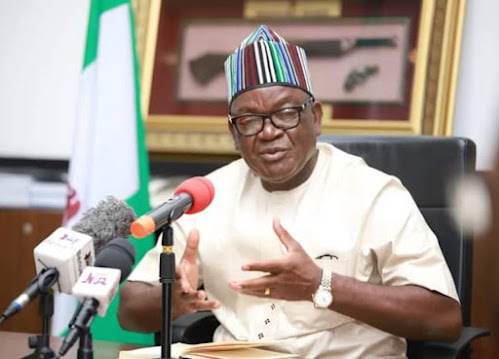 Benue State Governor, Samuel Ortom, who is also the Benue North-West Senatorial candidate of the Peoples Democratic Party, PDP, has inaugurated his campaign team ahead of the 2023 general elections.

The governor appointed Hon. Mike Mku as the Director of his Senatorial Campaign Team.

The inauguration took place during the expanded caucus meeting of the Benue North-West PDP stakeholders held Friday, October 28th, 2022 at the new Banquet Hall of the Benue Peoples House, Makurdi.

The Governor lauded the people of the Benue North-West senatorial district for the love they had shown him by adopting him as the sole candidate of the party during the primaries and pledged to work for the interest of the people at all times.

He acknowledged the will of the people of Benue North-West senatorial district in choosing through a democratic approach, those who would drive his senatorial election bid, stating that he had confidence in them.

The Governor described members of the team as “veteran politicians and grassroots mobilizers” with the capacity to deliver on their assignment, stating that women and youths would also be selected to serve on the campaign team.

While reaffirming his commitment to the victory of PDP candidates, Governor Ortom charged members of the party to remain focused and work assiduously so that the party would win from bottom to top at the polls.

He further reiterated his determination to ensure that peace, justice and fairness prevails in the PDP, stressing that the party was united in the state.

In his response, the Director of the Benue North-West Senatorial Campaign Team, Hon. Mku thanked the Governor for the confidence reposed in him and the entire members of the team for the assignment and pledged his readiness to produce result.

“Together, we will do everything within our power to ensure that you emerge as Senator of Benue North-West. You have shown qualities that stand you out to offer effective representation, having excelled in your current assignment of leading Benue State well,” he said.

According to Mku, “The Benue North-West senatorial district is a familiar terrain to me and we will work hard for your victory,” emphasising that Ortom is contesting as a sole candidate without a strong challenger.

He also congratulated the Local Government Area Coordinators, whom he noted were chosen by their people in trust and pledged to work together with them to deliver on the assignment.

Acting State Chairman of the PDP, Hon. Isaac Mffo in a remark tasked members of the party on dedication to the victory of the party at the polls, adding that Governor Ortom has provided an effective leadership and would be elected into the National Assembly to represent the zone.