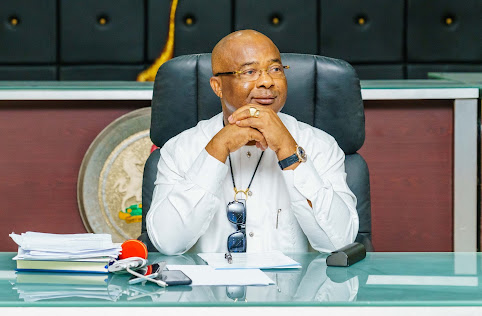 The opposition said it would amount to reinforcing failure and extending the massive treasury looting and outrageous bloodshed in Imo if Governor Uzodinma, is not booted out of power at the polls in November 2023.

PDP in a statement signed by its Publicity Secretary, Collins Opurozor in Owerri, said its finds it totally shameful and unacceptable that among the 36 states in the country, Imo State is presently at the lowest rung of the ladder as far as viability index is concerned.

The statement reads, “Our Party is also greatly pained that in the 2022 “State of States Report” recently published by a reputable civic organization, BudgIT, Imo has been classified as the worst State in the Southeast in terms of fiscal performance, and it is also among the ten worst States in Nigeria.

“This was the same Imo that won laurels in fiscal discipline, transparency and accountability in 2019 when our Party was in power.

“We have it on BudgIT’s authority that almost seventy percent of the over N600 billion that has accrued to Imo State under Senator Uzodinma has gone into recurrent expenditure. This is to the tune of well over N420 billion. Particularly, the government’s spending priorities show that this staggering sum has only gone into maintaining lengthy convoys, flying private jets, drinking champagnes, financing propaganda machineries, sustaining idle appointees and also frittered away through a multiplicity of other irresponsible ways.

“What is more troubling is that BudgIT explicitly says the regime of Senator Uzodinma has raised the debt profile of Imo State by 121% just in twelve months, thereby increasing Imo’s indebtedness to N210 billion. Yet, there is absolutely no single landmark project done to justify that such loans have been taken.

“Even when the corrupt regime has hijacked and pocketed a total of N127 billion that came to the local governments from the Federation Accounts Allocation Committee (FAAC), there has not been a single trip of construction sand dropped in any local government area of the State.

“Instead, Senator Uzodinma has dispatched a team of his praise singers, led by a factional State Chairman of the APC, to the various local government areas to mock the people by telling them that, “Our Governor sent us.

“We came to hear your challenges and problems for onward presentation to the government in Owerri for a solution.

“This is indisputable evidence that for three years, Senator Uzodinma neither understands anything about the challenges facing the various areas of the State, nor has he done anything to address the challenges.

“Imo PDP therefore urges Imo people to remain patient and resolute, being aware that this very cruel regime which has wrought untold agonies on them will soon give way for good.”