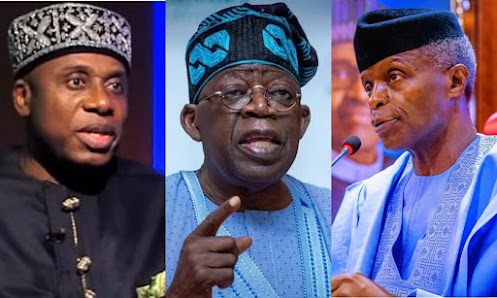 With the presidential campaign kicked-off for the 2023 general election, the All Progressives Congress, APC, will no doubt miss the dexterity of former minister, Chibuike Amaechi.

Party leaders such as the Vice President, Prof. Yemi Osinbajo and the former Governor of Rivers State, Amaechi have gone hibernating from party activities since the primary election.

Amaechi was the Director-General of President Muhammadu Buhari’s Campaign organisation both in 2015 and 2019 elections. He delivered in the two successive elections.

However, that is not the case as the party prepares for the 2023 polls.

While Osinbajo was conspicuously missing from the Tinubu-Shettima Presidential Campaign Council, Amaechi has neither accepted nor rejected his appointment into the campaign movement.

Saga Gist recalls that after weeks of intrigues and uncertainty, Tinubu polled 1,271 votes to beat his closest contenders Amaechi (316 votes) and Osinbajo (235 votes).

Tinubu was able to get northern governors behind himself after the likes of Simon Lalong of Plateau State, Nasir Elrufai of Kaduna and Abubakar Badaru of Jigawa State had earlier publicly backed Amaechi.

Following the emergence of Atiku Abubakar as the presidential candidate of the Peoples Democratic Party, the Northern APC governors closed ranks and aligned with Tinubu. They believed that Amaechi had a very slim chance of defeating Atiku.

Badaru, who had openly pledged support for Amaechi, subsequently led the contingent of presidential aspirants who stepped down and asked his supporters to support Tinubu.

And after the presidential primaries, Tinubu claimed he fought to win the ticket, insisting there was a gang-up against his person.

An insider in Tinubu presidential campaign council said the former Lagos helmsman has not yet forgiven all those who contested with him during the presidential primary, especially Amaechi and Osinbajo.

According to him, Tinubu had made it very clear that it was his turn to become President after Buhari. He did everything to ensure that the APC came to power but he was disappointed to see the likes of Osinbajo challenge him to the end. The APC national leader was said to be highly disappointed that Osinbajo did not step down alongside about 8 other aspirants that stepped down for him on that night.

The insider added that Osinbajo sees Tinubu’s emergence as backwardness. He said although the VP knows that his former boss has ideas that could better the country, his age and frail health would be a major drag-back for Nigeria and thus would never pretend to be supporting him.

According to our source, “Most people take it as a mere joke when Tinubu says becoming Nigerian President is a childhood dream. This is something he had dreamt and worked for all his life. He should have been Vice President in 2015 if not this Muslim-Muslim ticket and it would have been easier for him now but he gave that up and nominated one of his boys – Osinbajo for that position

“When the Northern Governors agreed that it was Tinubu’s turn after weeks of intense politicking, he didn’t expect any of the aspirants to contest with him in the primary, that’s the truth. But Osinbajo and Amaechi dragged on and since then, the relationship has not been the same. He’s not the one who included Amaechi in his campaign team. Tinubu was more interested in bringing Governor Nyesom Wike to his side than Amaechi. Amaechi is one person who does not believe in Tinubu and feels betrayed by the outcome of the primary. Amaechi said something a few weeks after the primary and what he said didn’t sink well with Tinubu’s camp. Anybody expecting the former minister to work for Tinubu’s victory is wasting their time. It’s almost like Wike and Atiku only that Amaechi does not talk or behave like the Governor. Also note that it’s not a coincidence that Osinbajo is not named in the presidential campaign council. In fact, he should be one of the persons spear-heading the campaign.

“Before I end, let me say this, when someone says he’s fine, can’t Nigerians just respect that? It’s his health for Christ sake and no one knows better about your health than you. No doubt in my heart that our presidential candidate will win the 2023 presidential election for our great party with or without the support of these people. He has the structures on ground but the truth is it would be easier for us with their support.”

However, while addressing a group in Kano that worked for Osinbajo’s presidential bid, Tinubu insisted he does not have anything against Osinbajo, saying, “I have nothing against him. I’ve been to his house after the primaries.

“I saw him on the day of the goodwill message [at] the retreat organised by the president. If you cannot give forgiveness, how are you asking from Allah? To me, it is over.”