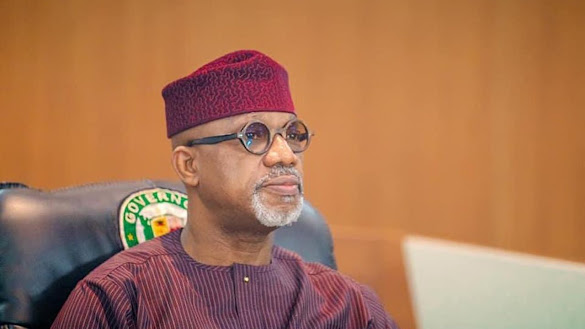 The Ogun State governor, Dapo Abiodun, has disclosed that his administration has increased the quarterly payment to defray outstanding gratuities from N500m to N600m.

The governor, who noted that his administration would continue to put the welfare of the people, especially the senior citizens at the front burner, equally disclosed that over N70billion had been released for the payment of gratituity arrears since he assumed office in 2019.

Abiodun made this disclosure during the Town Hall Meeting on the 2023- 2025 Medium Term Expenditure Framework(MTEF) and 2023 Budget for Ogun East Senatorial District, held in Ijebu-Ode.

He explained that the economy of Ogun is on a sustainable path as the state has been able to realize over N70billion as Internally Generated Revenue between the months of January and September, 2022.

The governor attributed the upward increase in the state’s IGR to the quality reforms initiated and implemented by his administration.

“We are happy to report to you that our state’s economy is on a sustainable path; largely to our focus on quality reform initiatives introduced by our administration. These include among others our land reform – the Ogun State Land and Revenue Management System; Judicial reforms; tax reforms and all other public financial management reforms.

“We are excited that all these are yielding a very positive impact on our economy, this is self evident in the growth of our Internally Generated Revenue,” he enthused

“A few days ago, I watched a clip that showed someone who can be best described as an Ogun State citizen in diaspora claiming that the IGR of this administration has declined compared to the previous administration.

“You know, people go on television and just speak because they think everything is political. Even if you are going to talk about politics, back it up with some facts.

“As at this month which is the tenth month of this year, we have been able to take in over N70b as IGR. You can do a projection that if we have done N70b in nine months, what are we likely to do by the end of the year?

“Last year, for the first time in the history of Ogun State, we did an IGR of over N100b. So, why would anybody go on television and be saying things that are blatantly false for the sake of politics.

“This is your state, either you live with us or you are in the diaspora, please do everything to continue to promote the fortune of your state,” Abiodun submitted.

The state helmsman further disclosed that his administration’s commitment towards infrastructural development had resulted in the building over 80 major roads and 120 others, totalling 400 kilometers of roads either constructed, reconstructed or rehabilitated.

He reiterated that no section of the state would be developed by his administration at the expense of another.

While noting how important an airport is towards the economy of the state, the governor said that aside from creating jobs for the people of the state, an airport would also help the state increase its position on the Ease of Doing Business Index.

The governor who informed the gathering that his administration would be performing the ground breaking for the Special Agro Processing Zone and seaport, said that the railway line from Alagbado would be extended to Kajola, while the one from Okokomaiko would be extended to Agbara to ease the movement of goods and services.

He added that graders would be sent to local governments across the state to commence grading of rural roads, adding that his administration has not forgotten the Ijebu-Ode- Ikangba-Ilese-Itele road.

Abiodun stressed that his administration has lowered the political temperature in the state which would allow every political party to go about its campaigns without any form of harassment, charging the youths to shun all forms of social vices.

Earlier, the Chief Economic Adviser and Commissioner for Finance, Dapo Okubadejo, noted that the present administration in the state has instituted the State Fiscal Responsibility Law 2020, which he said highlights the functions of all stakeholders as well as spelling out the expected fiscal activities in the state.

Okubadejo noted that the aim of his administration is to have meaningful engagement with all stakeholders as well as effectively implement ideas, insight and contributions with a view to uplift the economy.

He added that the state is adopting increased openness and citizen’s engagement process with a view to ensure fiscal discipline and discourage extra budgetary expenditure.