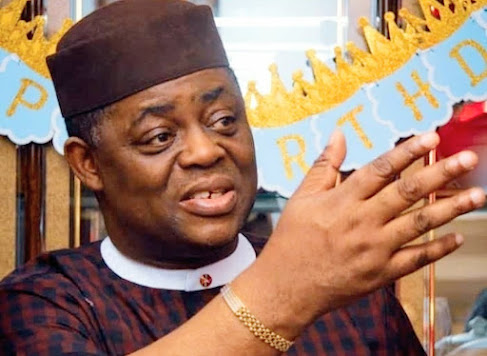 Former Aviation Minister, Femi Fani-Kayode has queried why the National Chairman of the Peoples Democratic Party, PDP and other members of the party’s National Working Committee, NWC are yet to be arrested over alleged misappropriation of funds.

Saga Gist recalls that the Rivers State Governor, Nyesom Wike had alleged that Ayu received N1 billion from a presidential aspirant before the party conducted its primary election.

Following the allegation, some members of the NWC refunded about N122 billion found in their various accounts to the party.

The party had, however, clarified that the money being returned was sent to them for their accommodations.

However, FFK while reacting to the allegation via a tweet on his verified handle, said Ayu and the NWC members should be arrested and questioned.

He wrote, “Why have the security agencies not rounded up the PDP National Chairman and all the other members of their NWC and questioned them about the misappropriation and diversion of the one billion naira that Wike told us about?

“Are the leaders of the opposition above the law”?