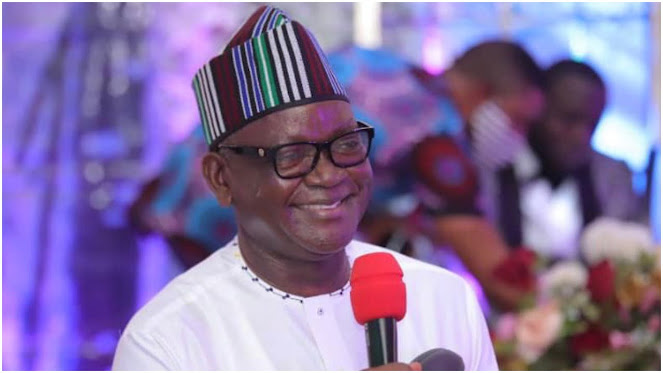 We read a statement credited to the Labour Party gubernatorial candidate in Benue State, Rt Hon Herman Hembe in which he accused the Ortom administration of neglecting Benue teachers and the education system in general.

We find the statement as just another outing aimed at whipping up sentiments to set the teachers against the present administration in order to gain political mileage.

It is obvious that the Labour Party governorship candidate is not aware that Benue teachers have at different times, appreciated and commended Governor Samuel Ortom for his efforts in addressing their welfare as it affects emoluments, promotions and other incentives of service.

The Benue teacher takes home a salary well higher than his/her counterparts in all northern states. This is a fact that can be verified by Hon Hembe and anyone else.

The measures taken by the Ortom administration to improve the welfare of Benue teachers include the following:

On assumption of office in 2015, the Governor met with the leadership of Nigeria Union of Teachers, NUT, Benue State Chapter and persuaded them to call off their strike which was ongoing at the time. Seeing the commitment and sincerity in Governor Ortom, the teachers called off their industrial action. The Governor approved the implementation of N18,000 minimum wage for Benue teachers, a decision that tremendously excited and motivated the teachers.

Promotion of teachers has also been regularized under this administration and the teachers have appreciated the Governor.

Following Governor Ortom’s approval, the Benue State Teaching Service Board, TSB, has commenced the process of recruiting additional teachers to fill existing vacancies in public secondary schools across the state. Arrangements for the recruitment of primary school teachers are also being concluded by the State Universal Basic Education Board, SUBEB.

Through the partnership with Universal Basic Education Commission, UBEC, the Benue State Government under Governor Ortom has in the last seven years, executed over 1,000 primary school projects across the state. In addition to the development of school infrastructure, the present administration has been providing thousands of customized desks and chairs for primary school pupils in the state.

The attention Governor Ortom has given to primary and secondary education is unprecedented in the history of the state. Aside from the new classroom blocks, the administration has provided other facilities like well equipped laboratories for science secondary schools. It has also upgraded a number of secondary schools in the state and made interventions in some faith-based and community schools while supporting the retraining of Benue teachers to equip them with modern education skills. The Ortom administration has also introduced e-learning by establishing the Benue State e-learning centre.

These and more have contributed to the excellent performance of Benue State in the last West African Examination Council (WAEC) examination in which the state came third in the country and first in the northern region.

Mrs Lucy Tyokyaa, a teacher with Government Girls College Makurdi won the Best Female Teacher of the Hadiza Ibrahim Aliyu Schools Festival (HIASFEST) 2021, a competition for Nigerian schools. A neglected and despondent teacher couldn’t have achieved such a feat. Benue students came 2nd in Quiz competition at Hii-Top Creative Arts Foundation organized for Nigerian schools in Minna, Niger State. This was also a result of the attention given to education by the Ortom administration.

Recognizing the importance of assisting students in their studies, Governor Ortom approved %100 increase of the yearly bursary allowances for Benue students from N5,000 to N10,000.

Under this administration, staff of Benue State University are on first line charge of salary payment, implying that they receive their salaries as and when due. Not long ago, the Governor approved the recruitment of additional staff for the state university.

Despite the daunting challenge of funds, the Ortom administration has been paying workers including teachers. The arrears of 2017 which was caused by the devastating recession the country plunged into, did not only affect Benue State. Many other states are still facing the negative impact of the recession.

Governor Ortom is, however not relenting in finding a solution to the outstanding wages. Recently, the State Government and the Joint Public Service Negotiation Council reached an agreement that the government will, on a monthly basis, set aside N150 million for payment of the 2017 arrears of salaries. This is among several other steps taken by the State Government to address the welfare of the workers.

While we have no problem with criticisms, it is equally imperative to point out that the job of the opposition should not only be to condemn a sitting government but to also acknowledge where the right things are done.