Businesses, vehicular movement shut down for hours in Calabar over Labour Party rally 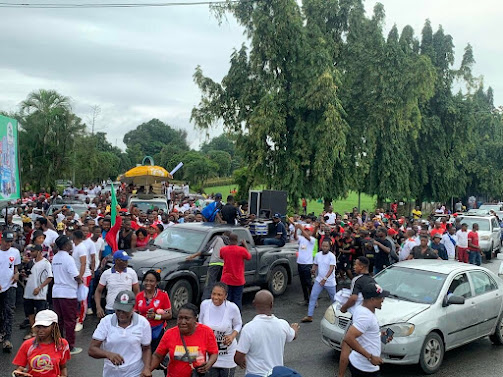 The city of Calabar was shut down for over five hours on Monday, 3 October 2022 when assorted support groups of the Labour Party in the state moved into the streets for a rally,

Major Calabar roads as well as adjoining streets close to the popular centre of activities, the eleven-eleven roundabout, where major state events are usually held, were jam-packed with members of the party.

They had converged at the roundabout as early as 7am, from where they launched into the major roads.

Young LP supporters chanted, “Freedom has come finally” while the elderly ones said, “Our time is fading out. We are doing this for your sake. You had better wake and seize this chance and free yourself from the cabals and corrupt politicians…”

Speaking to reporters, Ogar Osim said they had estimated to have only 2-million people marching but the crowd far exceeded two million, five hundred thousand persons.

“You can see that Nigerians are very tired of other parties that bastardise our collective gains and channelled them into selfish paths.