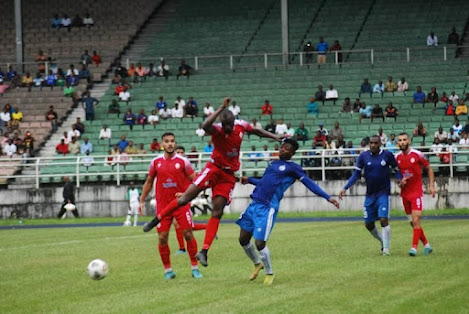 The CAF Champions League first round, first leg tie lived up to expectations with both teams contributing to the spectacle.

The lead lasted only two minutes before Malachi Ohawume levelled for the hosts.

Ghanaian midfielder, Paul Acquah put Rivers United in front for the time in the game with a clinical finish in the 53rd minute.

The reverse fixture will take place in Casablanca next week Friday.

Nigeria’s other representative in the competition, Plateau United also rallied back to beat Tunisian club, Esperance, 2-1 at the Moshood Abiola Stadium, Abuja.

Esperance took the lead on 27 minutes through Anice Badri.

Ifeanyi Emmanuel equalised for the home team in the 34th minute after the Tunisians failed to deal with Daniel Itodo’s long throw-in.

Mustapha Yuga netted the winning goal late in the first half.

The second leg is billed for next week Sunday in Tunis.