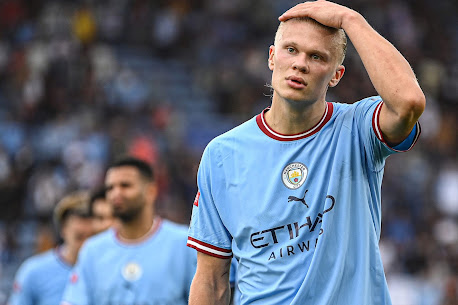 Manchester City manager, Pep Guardiola, has explained his decision not to summon Erling Haaland from the bench as they were held to a 0-0 draw by FC Copenhagen.

The Premier League champions saw Riyad Mahrez miss a penalty and Sergio Gomez sent off in an eventful first half.

However, Guardiola opted not to bring the red-hot Haaland after the break.

Speaking after the game, Guardiola said: “He finished the game against Southampton so, so tired and didn’t recover well.

“Yesterday was not good, today a little better but not perfect so we decide not to take the risk.”

The stalemate still guaranteed City’s place in the last 16 of the Champions League, after Sevilla later failed to beat Borussia Dortmund.