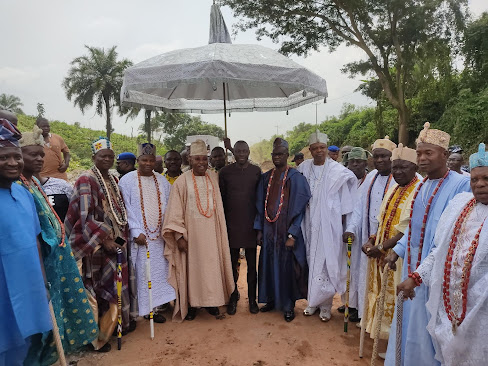 The Oluwo of Iwo, Oba Abdulrosheed Adewale Akanbi, stated that the rehabilitation of the Ibadan-Iwo-Osogbo road will go a long way to turn around the economic downturn experienced by people in communities along the road.

This is as Oba Akanbi also applauded the governments of Osun and Oyo states over the commencement of the construction of the road.

The Osun monarch stated this while addressing journalists in Iwo on Tuesday.

The construction of the road, which has been awarded to Peculiar Consult Nigeria Limited by the two state governments will be flagged off on Monday, October 24, 2022.

“This construction will boost our economy and take us away from isolation. We have been isolated because of the road. We have broken the jinx. This is a breakthrough since the 1970s they did this road. We are happy that our people will not be suffering anymore.

“The cordial relationship of the Oyo and Osun States governments will be cemented through developed inner gold which is road. If there is no way to somewhere it means that place does not exist.

“This road has been problematic and today we thank the governors of Osun and Oyo states, Seyi Makinde and Adegboyega Oyetola, for putting politics aside and listened to the masses and the kings. We told them we need this. We also thank the contractor, Engineer Lanre Adeleke.”

Meanwhile, the contractor handling the road construction has assured that that the road would be delivered within 18 months.

The Managing Director of Peculiar Consult Nigeria Limited, Lanre Adeleke gave this assurance on Tuesday on the sideline of the visit of the Oluwo and other traditional rulers to the road.

According to him, “18 months is the duration. We intend to finish before the time. And to answer your question I will say, on or before 18 months.

“We have mobilized to the site and as you would recollect this is 91KM road being jointly funded by Oyo and Osun State governments under the collaborative efforts called Alternative Project Funding Approach.

“This is being financed by the two state governments. The official flag off would be Monday, 24th of October, 2022. But between now and then we will be engaging in some palliative measures to ease vehicular movements.

“The two states are committed and the contract has been awarded to our organization.

“We will beg the road users to be patient. You can see we have our people from road management office in Osun and Oyo states. We have over 20 of them on either side. We also have our flag men that will be diverting people to alternative routes.

“By the time we are done, the time between Ibadan and Iwo will become 25 minutes and Iwo to Osogbo will be 23 minutes, the travel time will be about 48 minutes. It used to cost 2 hours in the past and from 2 weeks now it went as far as 5 hours for those who use this road. It will be reduced to less than 50 minutes.”