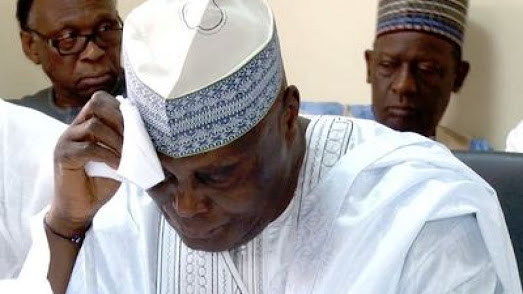 The Peoples Democratic Party, PDP, on Monday flagged-off its presidential campaign amidst an unresolved internal crisis.

An angry Governor Nyesom Wike of Rivers State and his allies, who are yet to be assuaged after the party’s presidential primary, sent a clear signal to the rally.

Though the campaign flag-off was well attended, observers say the absence of Wike, Ifeanyi Ugwuanyi of Enugu, Okezie Ikpeazu of Abia, Samuel Ortom of Benue and Seyi Makinde of Oyo is a huge blow to the opposition party’s dream of reclaiming the number one seat in the country.

This is not the first time the aggrieved governors are boycotting the party’s major event since Atiku’s emergence.

Saga Gist recalls that in September when the PDP Presidential Campaign Council (PCC) was inaugurated, Wike and his allies, including Governor Samuel Ortom of Benue State, still stayed away.

Their action is hinged on the insistence that the PDP National Chairman, Iyorchia AAyu must resign to provide for a sense of equity in the leadership of the party, with the Southern part of the country feeling neglected.

Prior to Ayu’s emergence as PDP national chairman, Wike and his allies were all over attending PDP activities and calling the shots.

However, after Ayu emerged chairman, the PDP, unlike the APC, refused to zone its presidential ticket to the South; it rather threw it open, paving the way for Atiku to clinch the ticket.

According to Governor Wike’s group, Ayu was supposed to step down immediately to allow a Southerner take over and ensure a balanced leadership in the party. But Ayu is not ready for that.

Few days ago, Atiku was said to have made another overture to Wike during a private meeting in Abuja where he reportedly promised to support the Rivers’ Governor in 2027, same promise he made to the South-East during his meeting with PDP stakeholders in Enugu.

Shortly after meeting with Atiku, Wike and his colleagues, who are now called G-5 Governors, stormed Enugu, where they held a closed-door meeting.

Though the G-5 refused to brief journalists after the meeting, a source had hinted that they sealed Atiku’s fate.

“Their stand remains that if Ayu refuses to resign, they will not be part of any presidential campaign of the party.

“Both Atiku and Ayu are obstinate to the calls for the national chairman’s resignation; what it means is that they don’t value the support of these governors. So, the G-5 Governors have also decided not to move an inch from their stand.

“They made that point clear again today in Uyo and there is no going back; these Governors have been the ones sustaining the party, but Atiku and Ayu came from nowhere and want to rubbish them. Let’s see how far they will go,” the highly placed source said.

Speaking on the latest development, the Secretary-General of Ohanaeze Ndigbo, Mazi Okechukwu Isiguzoro said the action of the G-5 Governors was not a surprise.

He noted that the G-5 Governors were right to boycott Atiku’s campaign flag-off owing to the PDP’s unjust treatment of Southern Nigeria.

Isizuzoro said, “They have shown that they are true Nigerians. How could you explain a situation where a party’s presidential candidate and the national chairman will come from one region? So, what are they going to tell the people during the campaign?

“How would these Southern and Middle-Belt Governors go and start preaching to people to support Atiku? It will be a misnomer, it will be a bad show.

“We told you the last time that about 18 Governors are behind Peter Obi. Atiku is being deceived by someone in the presidency; he will only survive 2023 if he heeds to the demand of Wike and his group.

“But if he continues to let pride rule over him, what happened to him in 2019 would be a child’s play to the fate that will befall him in 2023. He will come a distant third in that election. It appears that the gods have blinded his reasoning and that is why Ayu has refused to step down. PDP as it is constituted today has no sense of justice and equity.

“You saw that the stadium could not even be filled up; Wike alone is a mass movement; so, you can’t underrate his absence, alongside his four other colleagues.”

“Don’t also forget that Atiku is not sincere towards resolving the crisis at all. Recall that in Enugu he told the people of the South-East that his presidency will be a stepping stone to their dream of having a Nigerian President of Igbo extraction. Few days later, he was quoted to have promised Wike of the same presidency in 2027. Is this a leader you can trust? NIgerians are wiser now,” the Ohaneze scribe added.