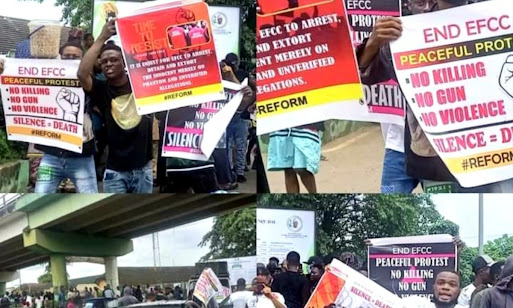 The Economic and Financial Crimes Commission (EFCC) has reacted to the protests in some states by suspected internet fraudsters.

Popularly known as ‘Yahoo boys’, scores of them gathered on Thursday and marched around streets in Ibadan.

The youths also stopped at the main entrance of the Oyo State Government Secretariat in Agodi.

They accused the EFCC of incessant raids, arrests, detention, extortion, breaking and entering, confiscation of phones and cars, seizure of dogs, among others.

The protesters carried placards with various inscriptions, including ‘End EFCC’, ‘Our leaders are the true scammers’, etc.

The demonstration followed a similar one that suspected fraudsters held at the Effurun roundabout along the Ughelli-Port Harcourt road in Delta State.

In response, the EFCC stressed that its mandate is to rid Nigeria of all forms of economic and financial crimes.

“The Abdulrasheed Bawa-led Management of the Commission has vowed to execute this mandate to the letter.

“Yahoo boys came out to protest because the Eagle strongly detest their fraudulent interest.

“But the EFCC will continue to do her best to locate, investigate and arrest anyone causing economic unrest”, the anti-graft agency said.