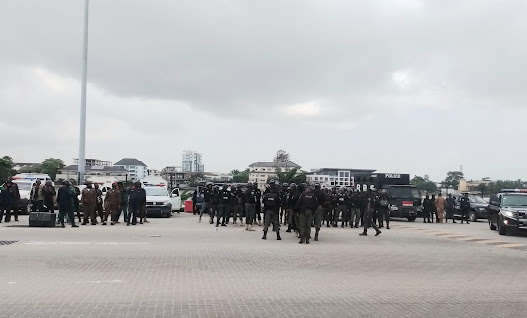 The Lagos State Police Command has relaxed the presence of its men at the Lekki toll gate on the day Nigerians commemorated the End SARS anniversary.

Police personnel took over the location as of the night of Wednesday October 19. By Thursday morning, the number increased.

But by 9pm, Saga Gist correspondent observed that most of the operatives seen during the day were no longer present.

Only two/three vehicles were seen on each side of the road, as against at least 15 during the day.

Residents are moving freely and the nightlife as bubbly as usual.

In the morning, the police fired tear gas at demonstrators at the toll gate. Calm was restored after both parties controlled temper.

Hours later, the police told the public that minimal force was used to disperse youths who had gathered for the memorial procession.

On October 27, 2020, the 81 Division of the Nigerian Army (NA) said the Lagos government invited the military to intervene during the October 20 protests.

The Army revealed that this was after a curfew was imposed by Governor Babajide Sanwo-Olu.

Taiwo told the commission that hoodlums had taken over the metropolis and overran police teams across the state.

The General said the scenes of the carnage that followed the toll gate shooting were reminiscent of the Liberian Civil War.

“It was these incidents that made the Governor of Lagos State to ask for military intervention.

“In my opinion, that was the correct thing to do since the police had been overrun and policemen were fighting for their dear lives”, Taiwo noted.

The Panel of Inquiry on Restitution for Victims of SARS Related Abuses and other Matters indicted the military and the Lagos government.

It reads in part: “After the Nigerian Army left, Nigeria Police Force followed up with the killing of the protesters, shooting directly at fleeing protesters into the shanties and the Lagoon at the Lekki Phase 1 Foreshore, close to the Lekki Toll Gate, floating corpse and one-shot close to Serah Ibrahim.

“The testimony and report of Professor John Obafunwa, a forensic pathologist of Lagos State University Teaching Hospital, showed that three corpses were deposited at the Mainland Hospital, Yaba Hospital, all from the Lekki Toll Gate and the autopsy conducted thereon revealed death from bleeding caused by penetrating objects or rifled weapon.

“The panel finds that the fact of lack of identity of some of the other 96 corpses on the list supplied by Professor Obafunwa would not obliterate the fact that some of them could have come from the Lekki Toll Gate, or that some other unidentified corpses may have been removed by their families or the military, as claimed by the #EndSARS protesters.”