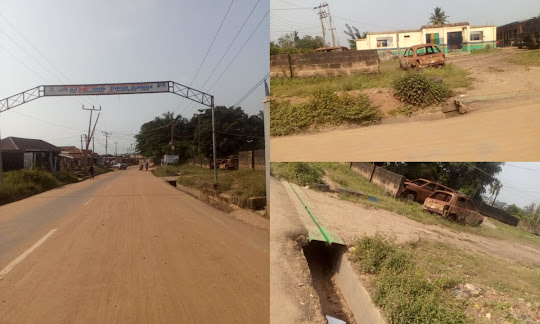 One of the days which residents of Ogungbade, Kukumoda, Aba Igbira, Amero, Papa and Adeji will not forget in a hurry is Friday, 23rd October, 2020.

That day remains a day to remember by residents of the communities as one of the projects financed by residents was razed down.

The communities are located along the new Ife/Ibadan Expressway in Egbeda Local Government Area of Ibadan, the Oyo State capital.

It was the day Ogungbade Police Station, the only one serving more than thirty (30) communities in the local government area was burnt.

The police station is just about one kilometre to the new Ife/Ibadan expressway.

Investigation during a recent visit to the communities revealed that the landlords in these communities had a few years ago invested their money to build the police station as a way to reduce the rate of armed robbers in their areas.

The desire of the people was, however, truncated when some hoodlums took the advantage of EndSARS protests to set the police station ablaze on Friday, 23rd October 2020.

What became known as EndSARS protests in Nigeria came to limelight a few weeks prior to the protests which rocked major towns and cities in Nigeria.

The protests, which disrupted economic activities in major cities, have been described as the most coordinated protests by Nigerian youths in recent times.

According to Wikipedia, EndSARS is a decentralised social movement, and a series of mass protests against police brutality in Nigeria.

The slogan calls for the disbanding of the Special Anti-Robbery Squad (SARS), a unit of the Nigeria Police with a long record of alleged abuse of the rights of Nigerians.

It was during the ENDSARS protests that some angry youths took advantage to burn the police station.

The police station, according to the residents, was built by the members of the communities through self finance.

According to the residents, the police station was financed by the communities with about five million naira (N5m).

According to one of the residents, the police station was burnt to ashes by the hoodlums despite several pleas by the landlords on that fateful day.

Though residents prevented the hoodlums from burning the police station on the previous day (Thursday 22nd October, 2020), by keeping vigil up till 12 am on Friday, many of the residents were surprised to see their investment on fire when they woke up on Friday.

This was how Ogungbade police station which is one of the police stations under Egbeda Divisional Police Headquarters in Oyo State was burnt to ashes.

Investigations revealed that about seven (7) police stations in Oyo State were either completely or partially burnt during the EndSARS protests between Tuesday 20th October and Friday 23rd October 2020.

Six (6) of these stations are in Ibadan, while only one police station is in Iseyin.

It was gathered that among the items burnt in the affected police stations included patrol vehicles, seized vehicles and those parked beside the stations.

In total, It was learnt that more than forty (40) vehicles were burnt and vandalised in those police stations.

Other items which included electronic gadgets, generating sets and other office equipment were razed by the irate youths.

Several arms and ammunition, which included guns, rifles and other security gadgets were carted away during the protests by the hoodlums.

According to the residents, Ogungbade police was completed about seven (7) years ago.

It was built for a period of one year, six months.

Residents said during a visit on Friday that the money, about five million naira, was contributed by the residents to complete the police station seven years ago.

Six vehicles were burnt with the police station according to the residents.

However, two years after the burning of the police station, the burnt section of the station has not been rebuilt.

A recent visit to the police station confirmed that the station remained the way it was when it was razed down two years ago.

It was discovered that the main section of the police station burnt during the protest is still in ruins.

Similarly, the vehicles that were burnt during the protest have not been evacuated from the station.

Some of the landlords who spoke during a visit to the communities expressed displeasure over the present situation of the police station.

One of the residents, who asked not to be mentioned, said that he was surprised that the police officers are still making use of makeshift structures as offices.

“The police officers are still making use of the makeshift structures as offices. The main station was burnt during the EndSARS two years ago but it has not been rebuilt.

He said, “This police station served several communities from Ife Road up to Papa, Oki in Iwo Road. It served many communities. The residents spent between 5 to 10 million naira to construct it and we handed it over to the Oyo State Police command.

“But, the main police station which housed the DPO office, armoury, cell and offices was burnt during the EndSARS. It has not been rebuilt, it is still there just the way it was in 2020 when it was burnt.

“The officers are now making use of shops adjacent to the main building.”

We commenced collection of money for reconstruction in September – Landlords’ association

The landlords in the communities have said that they were making efforts to reconstruct the burnt station.

The communities noted that they began collection of money for the reconstruction of the police station in September this year.

He said, “It was burnt in October 2020. So, since then it has been there. They said that the government wants to rebuild it, but all our efforts, even that of the DPO of Gbagi have been in vain. The Area Commander came recently; he told us that they will write a letter to convert it to Divisional Police Headquarters, but it is the same story.

“They came later to tell us to go and rebuild it. They told us to reconstruct it, so recently we are making efforts to contribute money. We want to use the money to buy a patrol van because there are only two patrol vans in Egbeda. We contributed one thousand naira (1,000) per house, but along the line, someone came to donate a golf car to us and we used it as a patrol van.