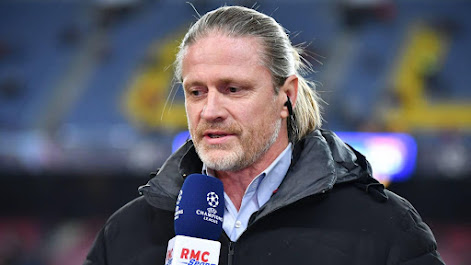 Arsenal legend Emmanuel Petit has said that defender William Saliba failed to manage his ‘nervous’ defence partner Gabriel Magalhaes during their 3-2 victory over Liverpool in the Premier League on Sunday.

The Gunners’ latest victory, being their 8th out of nine matches so far this season, ensured they reclaimed the top spot in the Premier League table.

Gabriel, who gave away a penalty in the game against Tottenham last week, once again had a difficult match against Liverpool.

The Brazilian was particularly at fault for Darwin Nunez’s first-half goal for Jurgen Klopp’s side.

However, Petit, who hailed the rest of Arsenal’s defence, believes Saliba should have marshalled his team-mate better.

“I thought Gabriel looked nervous and if I was Saliba, I’d have talked to him straight away and told him not to touch the ball, let it bounce and let our players come back in defence,” Petit told Genting Casino.

“If you have a 50/50 percent chance of getting the ball you’re at risk of it being played in a dangerous area and he allowed this to happen yesterday.”

He blamed the Brazil international for Darwin Nunez’s equaliser, adding that Gabriel’s positioning was not good enough on many occasions during the game.

He noted that the Brazilian is not hundred percent confident of himself while his defence partners Ben White and Saliba have been terrific.