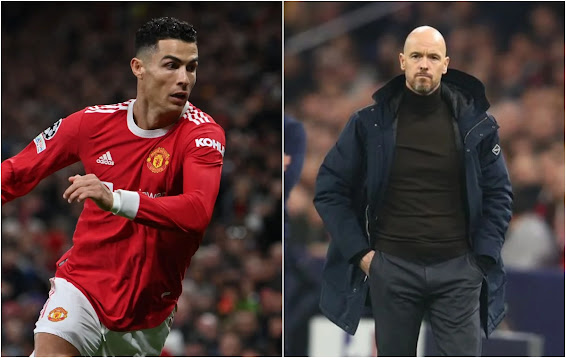 Manchester United manager, Erik ten Hag, will only allow Cristiano Ronaldo back into the team this week on two conditions.

According to The Athletic, Ronaldo must accept his reduced role in the squad and express “contrition” over last week’s antics.

The 37-year-old snubbed Ten Hag’s order to come on as a substitute during United’s 2-0 win over Tottenham on Wednesday.

Instead, he stormed down the tunnel with the match still going on and left Old Trafford before full time.

As a result, Ronaldo was banished from the squad for the 1-1 draw with Chelsea having also been exiled from first-team training.

Erik ten Hag, who has given his side Monday off ahead of Thursday’s Europa League clash against FC Sheriff, has explained Ronaldo will still have a role to play this season.

But the United boss first wants to hear what Ronaldo has to say on what has transpired over the last five days.

Ten Hag will allow the veteran to re-join first-team training should he “accept flexibility over his selection and express contrition” over his behaviour last week.