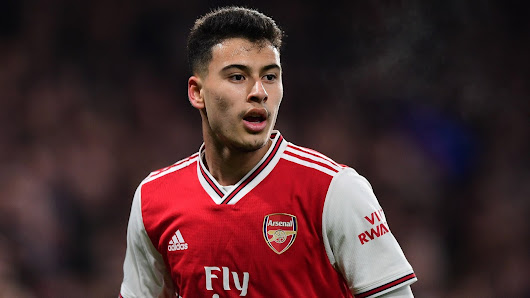 Arsenal forward, Gabriel Martinelli believes the North London club have a chance of winning the Premier League title this season.

According to Martinelli, Arsenal have only lost to Manchester United so far this season, adding that if his goal wasn’t disallowed against the Red Devils, things might have ended very differently for the Gunners.

The 21-year-old Brazilian has enjoyed a superb start to the season, scoring three goals to help Mikel Arteta’s side climb to the top of the Premier League.

Arsenal are currently on top of the Premier League table with one point ahead of second position Manchester City after beating their London rivals 3-1 last weekend.

“Obviously, this is just the beginning of the season, but since last year we knew he had a quite young team, so this is a project. And we are beginning to reap what has been sown,” Martinelli told The Times.

“We know we can achieve very big things, so we must keep the focus and the grit to try to achieve things this year because I think we have a chance.

“We have only lost to Manchester United, but if my goal wasn’t disallowed, things might have ended very differently for us.”

Arsenal will now face Bodo/Glimt in the Europa League on Thursday night before returning to domestic action on Sunday against Liverpool at Emirates.