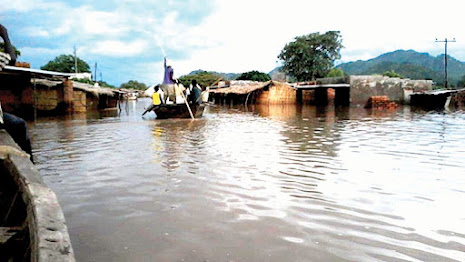 It was gathered that the incident happened in Nzam community on Tuesday. The family drowned after their house was submerged.

In a trending video, youths of the community were seen bringing out corpses from their house and depositing them in an upland area.

From the circulating video, the bodies consisted of a woman, her four children and her sister.

The family was reportedly preparing to leave for a safe place, before they were swept away by the flood.

Anambra and Kogi State have been described as the worse hit states in the recent flood.

About 81 people had lost their lives in two boat incidences in another part of Anambra; Ogbaru, just last week, while a man who had successfully evacuated his family from the flood and opted to stay back to take care of the vicinity was recently drowned in his sleep in the same Ogbaru.

The National Emergency Management Agency, NEMA, in a press conference had said that it has commenced aerial surveillance, using helicopters to rescue trapped residents of flooded areas.