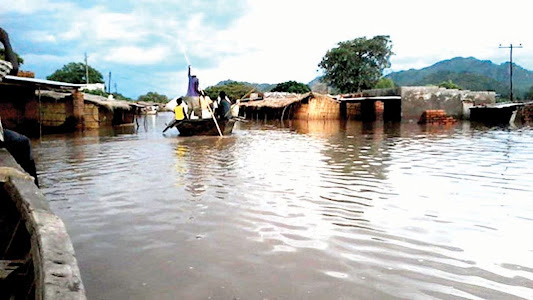 The Chairman of Ndokwa East Local Government Area of Delta State, Hon. Juan Amechee Governor, on Sunday, said the Council has recorded two deaths as a result of the flood that has overtaken the area.

This is contained in a statement, he said one of the victims is a woman in her 40s and is from ward 5, Akarai, while the second victim is a six-year-old boy from Otuoku community in ward 6.

Hon. Juan Amechee Governor also commiserated with the families of the victims.

He said in Ward 1, comprising Umu Osimili Ossissa, Umuleke Ossisa, Umu Eze Ossisa, Olao Ossisa, Umu Uno and Umu Okolo, their entire farmlands have been flooded, while about 20 percent of the communities have been covered by flood, displacing 95 households.

“In Ward 2 comprising Afor Umuachi, Iselegu, Obikwele, Afor Ogbedigbo, Afor Okolori, Afor Obetim, Afor Umuachi Ogo, Afor Ogbeti also had all their farmlands taken over by the floods with about 40 % of the communities have been covered by flood displacing a hundred and six (106) households.

“Ward 3 comprises of Aballa Osimili, Aballa Obodo, Aballa Uno, Inyi and Onuabor. While has all their farmlands has been covered by the floods, the communities are totally displaced rendering ive hundred and fifty eight (558) households homeless.

“Ward 4 is made up of Okpai, Beneku and Utchi clans. All the farmlands in the ward are now covered by the floods while the communities are totally displaced rendering over four hundred and fifty nine (459) households displaced.

“Ward 5 is made up of Aboh, Umuti, Afiankwor, Okpokirika Ozizor, Akarai Etiti and Akarai Obodo. The ward has all their farmlands covered by the floods while the communities are totally displaced rendering three hundred and forty-two (342) households displaced.

“Ward 6 is made up of Umuolu, Okpokilika, Adiai’Obi Aka. Onyah, Owuriobia, Warri Irri and Otuoku. The ward farmlands have been submerged by the floods while the communities are totally displaced rendering three hundred and twenty five (325) households displaced.

“Ward 7 comprises of Ase, Asaba Ase, Iwene, Ogbokor, Ekeregbesi, Egbeme Ase, and Anam Camp. All farmlands in this ward has also been taken over by floods and about 60% of the communities flooded thereby rendering three hundred and thirteen (313) households homeless.

“Ward 8 is made up of Ibedeni, Azagba, Ekpe, Okorafor Community and Osafu. All farmlands in the ward has also been covered by floods and about 70% of the communities flooded thereby rendering three hundred and sixty five (365) households homeless.

“Ward 9 comprises of Ibrede, Igbuku, Iyede Ame, Lagos Iyede, Awah, Onogbokor and Anyama. All farmlands in this ward have been taken over by the floods, 80% of the communities displace and four hundred and twelve (412) households rendered homeless.

“Ward 10 is made up of Ashaka, Ushie, Ugute, Egwede, Asaba Ashaka, Obi Ivi, Ogbarude, Obi Ujene and Aballam. All farmlands in the ward have been displaced by the floods with 50% of the communities covered by water and Two hundred and Eighty five (285) households also displaced.”

He noted that few persons across the LGA have relocated from their communities to relatives and friends in unaffected towns and cities.

“Majority of the communities inhabitants declined from being evacuated because of the following reasons;Harvesting farm produces and managing to secure them for tomorrow’s sake, especially cassava, yams, plantains vegetables etc.

“Protecting their properties which are often suspended on makeshift temporal suspension racks in their communities.

“Some have no place to relocate to since IDP camps are not set up in the LGA. The state made attempt to set up IDP in Ashaka two days ago but the flood took over the Ashaka Skill Acquisition Center which was earmarked as the NELGA IDP camp. Consequently, the setting up of IDP camp in NELGA was put on hold.”

According to him,”Some would have relocated to other IDP camps in Kwale, Oleh or Ozoro but accounts of the suffering endured during previous years flooding in ISP camps discouraged them from going to any of these camps.

“Some persons felt that it is too late to relocate having endured the hardship for over three weeks into the floods before the setting up of camps was considered.

“Availability of safe heavens where few families can cluster in, especially storey buildings both completed and uncompleted as well as some micro islands in some communities.

“Some persons just resigned to their fate and has no confidence in Government because according to them, it has become an annual occurrence and it is only when the impact is felt in some “Special” areas that flood is given attention; forgetting that NELGA suffers floods on an annual basis.”