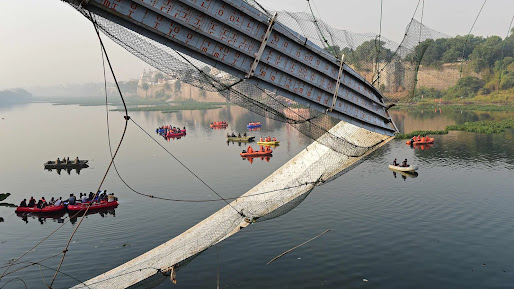 Over 100 people were killed on Monday when a suspension bridge collapsed over a river in western India, local media reported.

The accident occurred on Sunday evening in Morbi in the western Indian State of Gujarat, according to the report.

It said that 141 people died and 177 people were rescued when the bridge, which had recently reopened after renovation work, collapsed.

At the time of the collapse, up to 500 people were on the 232-metre-long suspension bridge, the report added.

Pictures and videos on social media showed the pedestrian bridge appearing to break apart in the middle and several people clinging on to avoid falling into the water.

An investigation into the accident had been launched, Gujarat Labor Minister Brijesh Merja said.

Prime Minister Narendra Modi’s office said on Twitter that compensation would be paid to the victims’ families. (NAN)