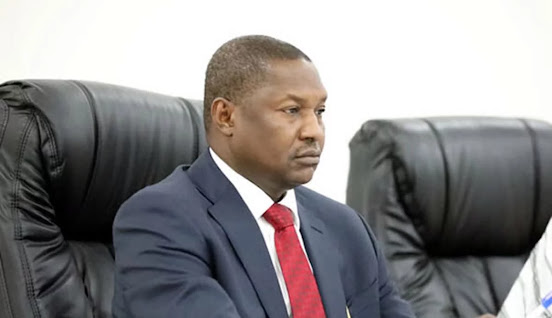 The Ohanaeze Youth Council OYC on Friday warned the Attorney-General of the Federation and Minister of Justice, Abubakar Malami, to tread with caution on his utterance concerning the judgement of the Court of Appeal.

This is following the release of Mazi Nnamdi Kanu, the leader of the Indigenous People of Biafra, IPOB, as ordered by the Court of Appeal.

Saga Gist had earlier reported that the Court of Appeal sitting in Abuja, the Federal Capital Territory on Thursday, October 13, 2022, upheld the appeal of the detained leader of the Indigenous People of Biafra(IPOB), Nnamdi Kanu.

The court also discharged and acquitted the embattled leader of IPOB.

Reacting immediately to the decision of the Appeal Court to discharge Kanu, AGF Malami, in a statement signed by the spokesperson, Dr. Umar Jibril Gwandu, Mr Malami said the appeal court only discharged Kanu and did not acquit him.

“The Office of the Attorney General of the Federation and Minister of Justice has received the news of the decision of the Court of Appeal concerning the trial of Nnamdi Kanu,” the statement said.

“For the avoidance of doubt and by the verdict of the Court, Kanu was only discharged and not acquitted.

“Consequently, the appropriate legal options before the authorities will be exploited and communicated accordingly to the public.

Reacting swiftly to Malami’s statement on Friday, the Ohanaeze Youth Council under the leadership of Igboayaka O Igboayaka, said the Council, without hesitation, warns sternly against the impending jeopardy that could be incurred, should the case be settled in court or any further delay of Nnamdi Kanu Release.

According to the council, “The Federal High Court lacks the jurisdiction to try Kanu in view of his abduction and extraordinary rendition to Nigeria in flagrant violation of the OAU Convention and protocol on extradition.”

“Why would Malami insist that the Nigerian government will pursue and explore other options to pursue Nnamdi Kanu trial after Thursday 13th October 2022 when a three-man panel of the Court of Appeal”.

“Why in the world should Dr. Umar Jibrilu Gwandu note that Mazi Nnamdi Kanu was only discharged and not acquitted, adding that other legal options will be explored by the government for his trial? And why would he say that the decision handed down by the court of appeal was on a single issue that borders on rendition”, Igboayaka queried.

OYC urged AGF Malami to “stop heating the legal battle between Nnamdi Kanu and federal government but embrace the political solution initiated by Prof. George Obiozor which President Mohammadu Buhari has considered and accepted as a means to reintegrate Old Eastern Region to heal the wounds inflicted on Biafrans that have lingered since 1966- 2022(57yrs)”.

“AGF Malami should bear in mind that if his personal idea is to pursue the case he must make necessary arrangements to send Nnamdi Kanu back to Kenya or Britain and follow the best legal International process to bring Nnamdi Kanu back to continue his trial.”

“AGF Malami’s utterance is evident that he doesn’t understand the time and season Nigeria is facing, with the fractured and disjointed Nigeria of multi-ethnicity crisis. Hitting on the Nnamdi Kanu case is an indirect way of calling for civil war.”