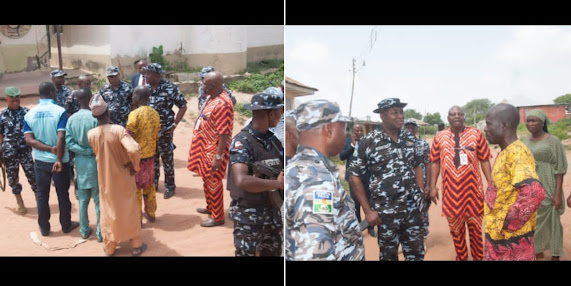 Saga Gist recalls that at least four kidnap cases were recorded recently in the communities leading to some residents deserting or relocating to safe areas in the Ilorin metropolis.

According to a statement by the spokesman of the state police command, Okasanmi Ajayi in Ilorin on Wednesday, the CP paid the visit in a bid to assess the security situation and strategy to rebuild the confidence of the residents.

The Commissioner also explained to the residents what the police command has done and is still doing to stop the alleged incursions of criminal elements into the fast developing communities.

Following complaints of the residents about kidnap incidents in the areas the police commissioner deployed three patrol teams, comprising conventional and men of the tactical teams of the command, which drastically reduced the fear and apprehensions in the minds of the residents.

He assured the communities of police determination to ensure adequate security for the citizens of the state and urged the people to support the police deployed to the area by providing timely information for necessary action.

Paul Odama further urged the people to report policemen whose conduct is at variance with their rules of engagement in the communities.

He advised members of the communities not to panic or relocate as the areas were now safe and peaceful for them to carry on with their legitimate businesses without any fear of attack and intimidation.

He stated that since the arrival of the police teams, the people of the communities have been sleeping with their two eyes closed.

He said members of the communities were ready to support the policemen with necessary materials that could enhance their duty in the area.

The representatives of the community joined the CP’s convoy to patrol the area while showing the CP the area they fear the criminals used in accessing the community.