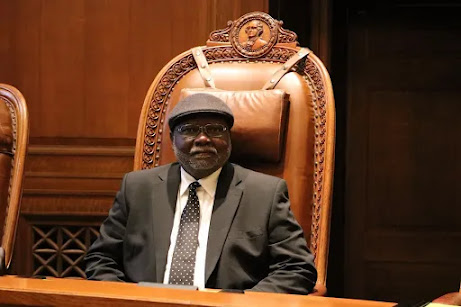 The Chief Justice of Nigeria (CJN) Justice Olukayode Ariwoola, has advised politicians to allow the judiciary arm of government to do its job.

Ariwoola who spoke at the weekend in Ibadan, the Oyo state capital, also warned the judiciary to leave politics for the politicians.

The CJN made these disclosures at a reception organised in his honour by the Oyo State Government.

The event had in attendance, justices of the Supreme Court, members of Oyo State Judiciary, top lawyers, and other eminent Nigerians among whom are Governor Seyi Makinde of Oyo state.

It was gathered that Ariwoola is an indigene of Iseyin in Oyo state.

The CJN was sworn in a few weeks ago.

But, the CJN while addressing the gathering, insisted that law is not static.

He used the occasion to call on politicians to allow the judiciary to do its job.

The CJN while speaking further also warned members of the judiciary against dabbling into politics.

He added that the judiciary under him as CJN shall not let down Nigerians.

He said, “I want to admonish the politicians to leave the Judiciary alone for us to function. Let them do their own thing while we do ours too.

“Law is not static. What we apply is law as it is made.”

He noted that there is no way anybody would write about governor Seyi Makinde of Oyo State and would not write that a CJN came from the state during his tenure.

“I feel overwhelmed today and thank my Governor. I want to assure Nigerians that we are ready and waiting and we shall not let down Nigerians.

“The Lord single-handedly, as He has always done, did it for my governor. It is during his time that the Yoruba has the position of the CJN again, which it last had 37 years ago.”