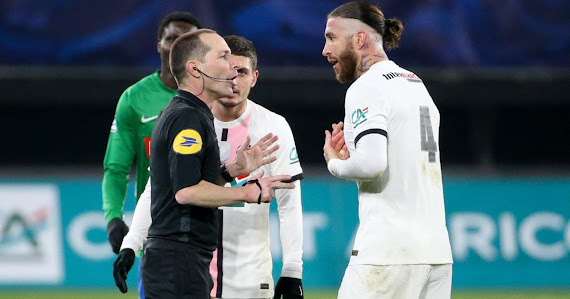 Paris Saint-Germain wing-back, Nordi Mukiele, has given his verdict on teammate Sergio Ramos’ red card against Stade Reims on Saturday.

PSG drew 0-0 against Reims in a French Ligue 1 tie on Saturday as Ramos was sent off during the closing stage of first-half.

PSG players hounded the referee after he gave Reims a free-kick and flashed a yellow card at Ramos for committing the foul.

Ramos continued to argue his case and eventually received a second booking for dissent.

PSG were thus forced to play over 50 minutes of the game with just ten men on the pitch and Mukiele, who started his third Ligue 1 match for Christophe Galtier’s men, believes Ramos could have avoided the red card, adding that it was a shame.

“It is football, it happens, it happened tonight against us. We could have stayed a little calmer. But you know, when you are on the pitch, you can’t calm the tension, you are in adrenaline,” Mukiele was quoted as saying by Canal Supporters.

“It is a shame to end up with a red. It is a red that could have been avoided. But the game is over, we will put that behind us. The red card changed the match, in the tensions, in the referee’s choices.”

He continued, “But I don’t want to talk about the referee, he may have made mistakes, we do too, so we have to put that aside. We are thinking of ourselves, we are thinking of recovering because we have important matches coming up.”