NAF to investigate allegations of accidental strikes on civilians 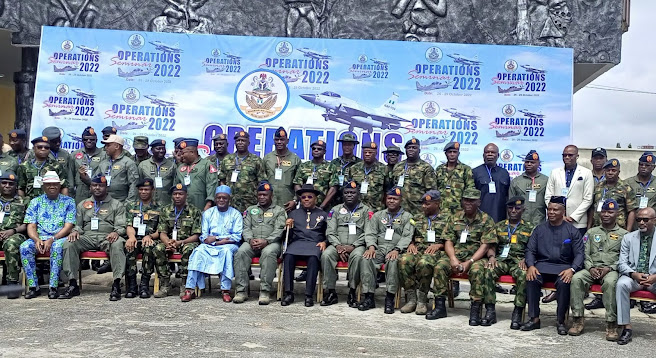 Following allegations of accidental strikes on civilians during operations of the Nigerian Air Force; the Chief of Air Staff, Air Marshal Isiaka Amao, said he has set up a committee of officers to compile all the complaints for proper investigations and review of the circumstances leading to such strikes.

Amao, who stated this on Thursday during the force operation seminar with the theme: “Harnessing Nigerian Air Force Combat Experience in Joint Military Operations for Doctrinal Development,” held in Uyo, Akwa Ibom State capital, said the investigations became imperative to minimize harm to civilians in conflict areas during Air operations.

He said mitigating civilian casualties was part of NAF’s mission objectives, therefore, the officers should ensure it is upheld.

According to him, “I strongly believe that the efforts to mitigate civilian casualties are a direct reflection of our values as a Service, as doing so is a strategic and moral imperative. You must therefore note that taking appropriate measures to minimize civilian casualties can further NAF’s mission objectives; help maintain the support of vulnerable populations; and enhance the legitimacy and sustainability of NAF operations critical to Nigeria’s national security.

“This is with a view to proffering far-reaching solutions that would mitigate future incidences of collateral damage on civilians during NAF operations. Considering the importance of equipment and manning to doctrinal development, there has been sustained drive to ensure requisite equipment and crew availability for the safe conduct of operations.”

The Chief of Air Staff also announced that the Force would take delivery of additional fighter helicopters from the Federal Government by December 2022 for training and combat readiness of the Nigerian Air Force.

Amao also disclosed that the Operatives have been able to neutralize the activities of terrorists in the country through intensive air interdiction of their locations and facilities.

He added that the persistent strikes by the Air Force have not only degraded the resources of the bandits but have disrupted their supply lines and denied them of their freedom of movement.

He said the terrorists have been surrendering in droves to Air troops due to the unbearable hardship meted out to them by the combined kinetic efforts of the Armed Forces of Nigeria.

The Air Chief also congratulated the newly winged young pilots and urged them to be prepared for the task ahead in their operational environment.

“Like I advised during the last winging ceremony, you must be relentless in the pursuit of excellence and professionalism, while working with your colleagues across other specialties in the Service.

“Let me use this opportunity to remind you that in the conduct of NAF operations, we must always adhere to laid down Rules of Engagement. It is mandatory that we also protect civilians and minimize civilian casualties during our operations.” Amao advised.

Declaring the event open, the governor of Akwa Ibom State, Mr Udom Emmanuel who was the special guest of honour emphasized on the importance of operation seminars in every organisation saying that it minimizes the level of operational errors in such establishments.

He also commended the leadership of the present Air Marshal saying that the force has lived up to its statutory responsibilities.