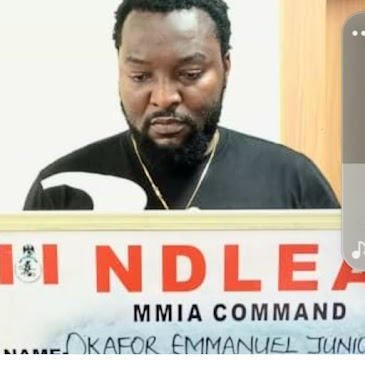 Okafor was caught at the Murtala Muhammed International Airport, Lagos, on arrival from Sao Paulo, Brazil.

The Nigerian was found with 1.40kg crack cocaine concealed in his bags after arriving via an Ethiopian Airlines flight.

The 33-year-old from Abia State was discovered to have hidden the illicit substance in the handles of his bags.

Okafor played soccer with University of Nigeria Teaching Hospital (UNTH) Enugu FC, where he was for four seasons, before leaving for Sri Lanka in 2014.

Also arrested at the Lagos airport was a Brazilian returnee, Ibeh Chinedu Damian, from Sao Paulo, via Ethiopian Airlines flight.

The suspect confessed that he was to be paid N3,100,000 on successful delivery of the drug in Nigeria.

Pamela Odin, a 32-year-old, was arrested while attempting to traffic 2.150kg tablets of rohypnol through the Nnamdi Azikiwe International Airport, Abuja to Istanbul, Turkey.

The mother of one, from Delta State, was scheduled to board a Turkish Airline flight with the drug concealed inside pepper and packed among foodstuff.