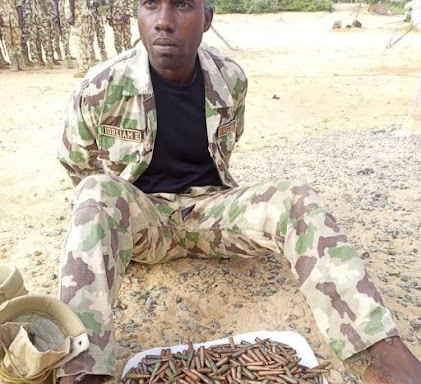 The Nigerian Army has arrested another member of its personnel collaborating with terrorists.

The soldier has been identified as Iorliam Emmanuel, reportedly in his 30s and hails from Benue State.

Emmanuel is a member of the 156 Task Force Battalion (Operation Hadin Kai) in Mainok town.

Mainok, 60km from the capital Maiduguri, is the headquarters of Kaga Local Government Area of Borno State.

Emmanuel was caught with ammunition, concealed in a bag and clothing tied around his waist.

A trending video shows colleagues exposing the bullets the suspect stuffed inside and underneath his uniform.

He is expected to face court martial for sneaking military supplies to terror gangs.

The arrest was made months after a soldier was caught assisting Boko Haram/Islamic State’s West Africa Province (ISWAP).

The Army said Lance Corporal Jibrin, an instructor, committed suicide while being escorted to the barracks.

Intelligence had exposed Jibrin’s involvement in the killings at some relaxation spots in Yobe State in April.

The attacks in Geidam and Gashua towns occurred within five days and claimed the lives of about 10 people.