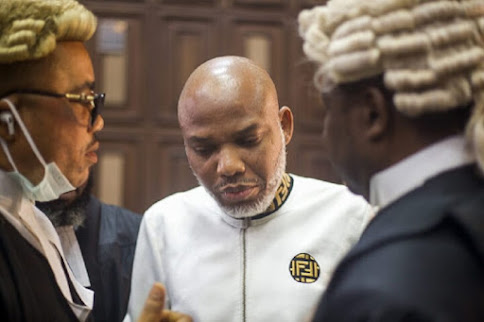 The Supreme Court will today, Monday, hear the appeal filed by the Federal Government asking that it should set aside the Appeal Court judgement that freed Nnamdi Kanu, the leader of the Indigenous People of Biafra, IPOB.

Saga Gist recalls that the Appellate Court had in a unanimous judgement by the three-man panel of justices, dismissed the charges against Kanu by the FG for flagrantly violating all known laws in the way it forcefully renditioned Kanu from Kenya to the country for the continuation of his trial.

“The court will never shy away from calling the Executive to order when it edges towards Executive recklessness”, the appellate court held.

However, the Federal Government has gone to the nation’s apex court asking it to stay the execution of the judgement the appellate court delivered on October 13.

Among other things, it is arguing that the appellate court panel erred in law and occasioned a miscarriage of justice when it relied on the manner Kanu was renditioned from Kenya to Nigeria after he jumped bail the trial court granted to him in 2017, to quash the entire charge against him.

Meanwhile, the Federal Government couldn’t heed to pleas by some eminent Nigerians to free Kanu from detention.

The Igbo socio-cultural group, Ohaneze Ndigbo had also pleaded with president Buhari to allow Kanu regain his freedom, but all pleas fell on deaf ears.