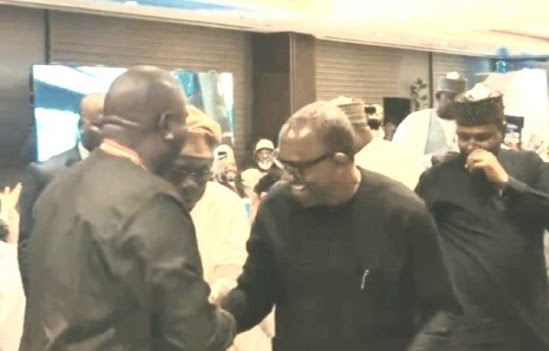 Former President Olusegun Obasanjo gave his seat to the Labour Party (LP) presidential candidate, Peter Obi at a function in Abuja this week.

Social media users are ascribing political annotations to a video of the scene now trending.

Obasanjo, Obi and other dignitaries were at the Transcorp Hilton in Abuja for a gathering organized by Fidelity Bank.

The event celebrated the national honour given to Professor Benedict Oramah by President Muhammadu Buhari.

Oramah is the President and Chairman of the Board of Directors of the African Export-Import Bank (Afreximbank).

In a Twitter post, @OluwaseunP, the master of ceremonies, narrated how Obi walked in while Obasanjo was making his speech.

The 2023 LP flagbearer took a seat at the back of the hall after refusing to take one of those reserved for VIPs.

“OBJ noticed & told them, “leave him alone o”. He then went himself to bring Obi to the front & gave him his own seat. Then said, “my job is done”, the tweet added.

The video has gone viral on Twitter and Facebook, with some describing Obasanjo’s action as “symbolic” and “an endorsement”.

It was gathered that some former Nigerian leaders were tactically supporting the former Anambra governor.

Obasanjo, in particular, is believed to be rallying other former Heads of State, influential retired Generals and powerful Northerners, including monarchs, for Obi.

There are speculations that the jet Obi has been using in recent times was offered by shipping and oil magnate, T. Y. Danjuma.

The 83-year-old former Chief of Army Staff served as the first Minister of Defence under the Obasanjo administration.

Akin Osuntokun, a former political adviser to Obasanjo, recently disclosed that his ex-principal may be supporting Obi to become President in 2023.