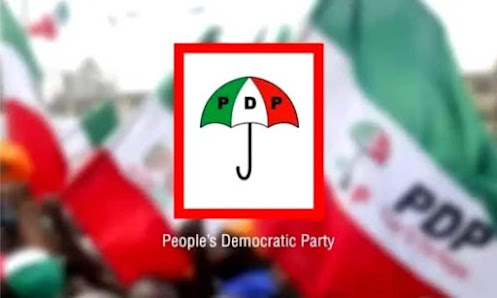 The PDP also accused Lawal of committing the alleged forgery in connivance with some top officials of INEC, saying the aim was to “deceive, manipulate and misrepresent facts.”

Saga Gist reports that Lawal had earlier on May 25, rejected a delegates list used by the party’s electoral committee for the governorship primary in Ogun, saying there was a list certified by the INEC.

As Ladi Adebutu emerged the governorship candidate of the party, Lawal approached a Federal High Court, requesting that the election be nullified based on the claim that the delegates were not those elected at the congresses held at the Ward, Local Government and State Levels.

Also, some members of the party went to court and obtained a judgment nullifying all the primary elections conducted by the PDP in Ogun; a judgment that is still being challenged at the Appeal Court.

But, the party in separate petitions by its lawyer, Oladimeji Hassan Balogun, requested the chairmen of the two anti-graft agencies to investigate Lawal and some officials of the INEC in Ogun for allegedly suppressing the authentic delegates’ list of the party.

The party in another petition addressed to the National Chairman of INEC, Mahmood Yakubu, accused the Head of Department and Party Monitoring of the state INEC and Director of Election and Party Monitoring Department at the INEC headquarters in Abuja of “deliberate and criminal suppression of PDP authentic delegates’ list with the view to fraudulently substituting the original documents with an unlawful delegate result purportedly submitted by Lawal.”

As a result, the PDP is calling for the investigation of the INEC officials involved in the alleged fraud.

The PDP alleged that the “suppression of the documents was done deliberately to give undue advantage to Lawal, who, relying on the ‘fake delegates’ list’ went to court.

“Lawal in collusion with others directly benefited from the deliberate suppression of the authentic 2022 Ogun state PDP delegate results by two officials of the INEC in Ogun state and the commission HQ, Abuja.”

It was stated that the allegedly doctored list was relied upon by judges to rule against the PDP at two separate courts in Abeokuta and Abuja.

The PDP humbly requested the EFCC and ICPC to immediately commence an investigation to ascertain the extent of the involvement of Lawal and the INEC staffers “in the illegal, unethical and fraudulent suppression of the authentic Ogun State PDP 2022 Ad-Hoc delegate result by INEC officials.”

Reacting, the INEC Resident Electoral Commissioner (REC) in Ogun, Niyi Ijalaye said, he was not aware of the petition.

“I have not sighted the petition. If there is a forgery, that is a matter for the police. It must be investigated by the security agencies. Forgery is a crime against the state,” the REC said.

Efforts to reach Mr Jimi Lawal were unsuccessful as calls to his phone did not go through because it was switched off. 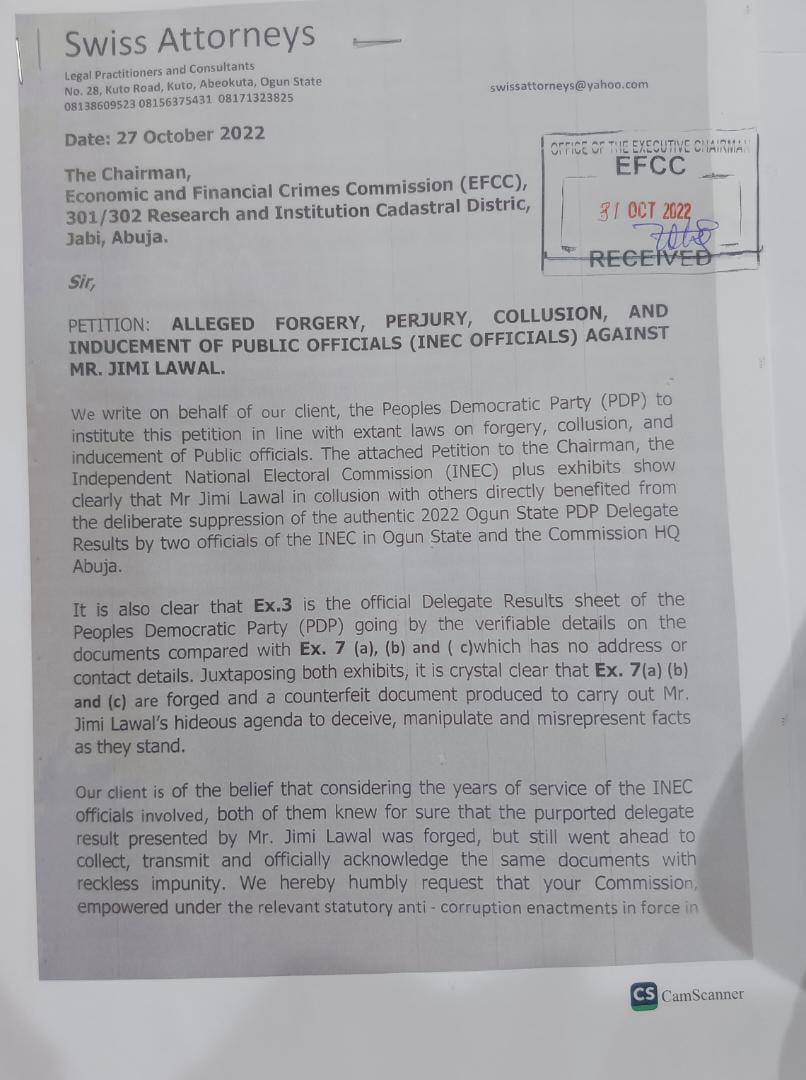 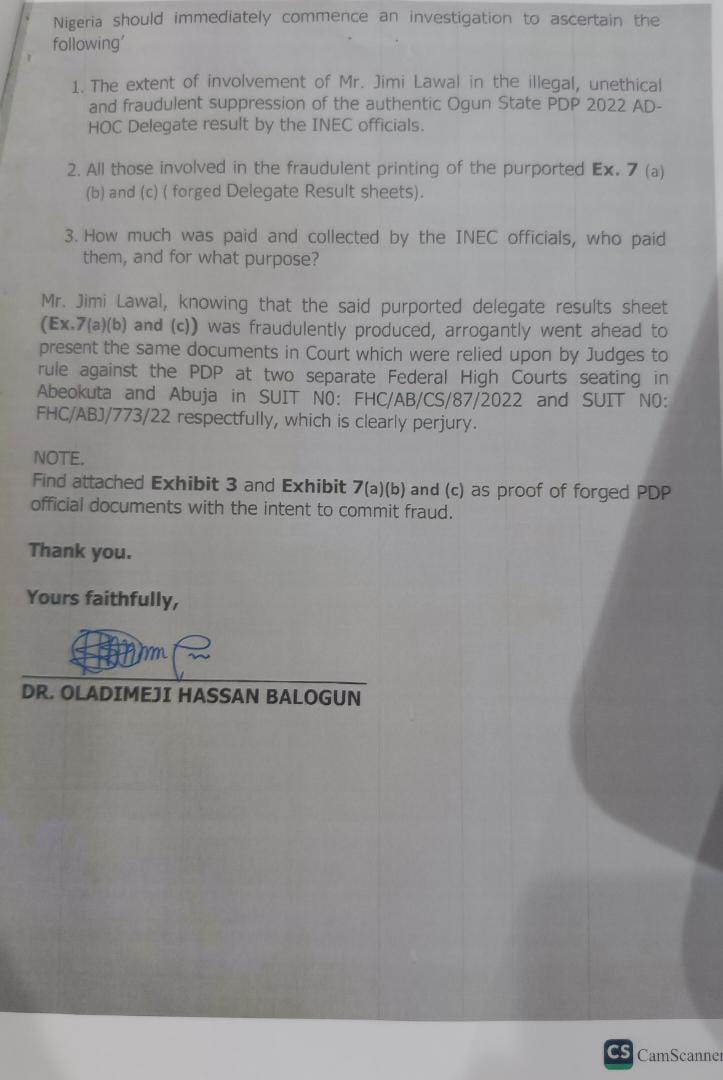 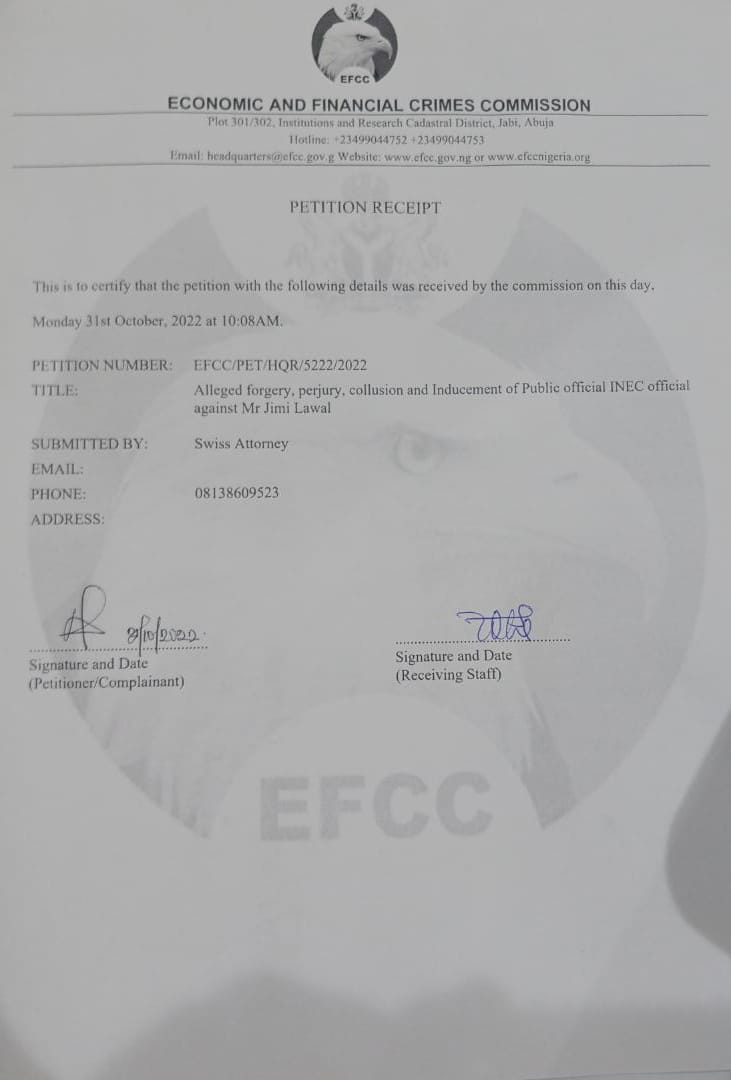