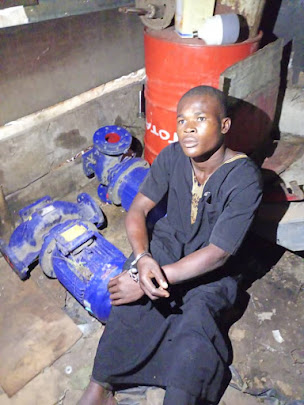 Operatives of the Ogun State So-Safe Corps) have arrested one Onyekachi Mbamlu, for alleged robbery.

The 28-year-old Mbamlu was arrested in Ayetoro village, Obafemi-Owode Local Government Area of the State, on Wednesday, at about 3am.

The suspect was said to have burgled a Dany Rossy Company in the area and carted away some items.

The So-Safe Corps Director of Information and Public Relations, Moruf Yusuf, said on Friday that the suspect had stolen two industrial pumping machines at the said company.

Meanwhile, the So-Safe Corps Commander, Soji Ganzallo, had directed the Divisional Officer of Lotto, SC Adeboye Adeyeri, to lead another team to the village so as to ensure that the remaining culprits at large are apprehended.

Yusuf informed that the suspect and the stolen items recovered from him have been transferred to the Mowe Divisional Police Headquarters for further investigation and likely prosecution.