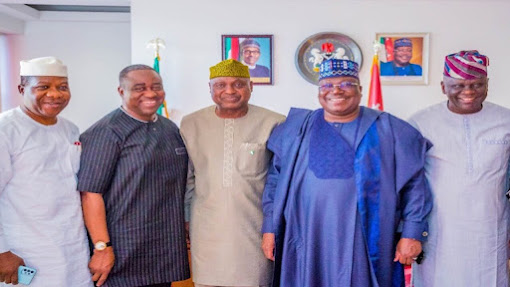 Ekiti State Governor, Mr Biodun Oyebanji on Wednesday led federal lawmakers from the state to a meeting with the Senate President, Ahmad Lawan, and other leaders of the Assembly in Abuja.

Governor Oyebanji discussed some of the challenges confronting the state, especially in the areas of the poor condition of federal roads and the absence of power supply to some areas of the state.

He sought the support of the National Assembly to ensure some of these concerns get necessary budgetary attention.

The Senate President who hailed the Governor for the visit pledged the support of the Upper legislative chamber for the Ekiti government’s developmental efforts.

The Governor also held talks with the leadership of House and Senate Committees on Works, and power where he made a strong case for the comprehensive renovation of Federal roads in Ekiti and fixing of electricity issues in some parts of the state.

Earlier, the Governor in the company of Senator Opeyemi Bamidele and Hon Femi Bamisile held a similar meeting with the Minister of Power, Abubakar Aliyu, where the issue of the upgrade of power infrastructure in the state, especially reconnection of some towns and communities to the national grid was tabled.

Governor Oyebanji said he was satisfied with the level of understanding shown by the leadership of the National Assembly as well as Federal lawmakers from Ekiti State, adding that no stone would be left unturned in the quest for support from relevant agencies and institutions for the socio-economic and infrastructure development of the state.