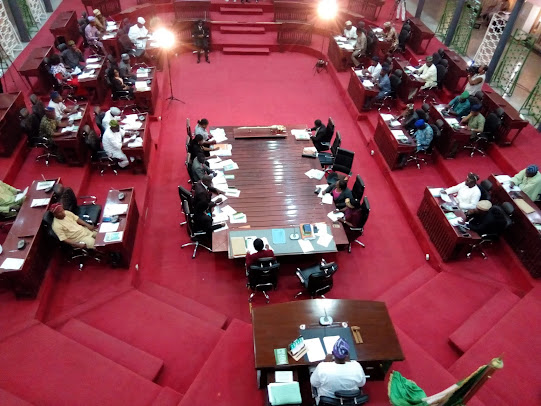 Members of Oyo State House of Assembly have pledged to rotate the positions of both the Babalola and Iyaloja among the various administrative zones in the state.

Our correspondent learnt that the move became necessary in order to avoid crisis among the market leaders.

Our correspondent recalls that the leadership of markets in the state has been in a series of crisis for the past few months.

It was learnt that two individuals have been parading themselves as Babaloja in the state.

Similarly, two individuals have also been parading themselves as Iyaloja in the state.

The lawmakers in the state have however vowed to avoid further crisis among the market leaders.

This was sequel to the passage of the bill aimed to rotate the positions among the various administrative zones in the state.

To avoid further crisis, the lawmakers in the state on Tuesday passed the Oyo State Market Leaders Council Bill, 2020 into law.

Saga Gist reports that the bill was passed following the presentation of the report of the House Committee on Commerce and Cooperatives.

One of the provisions of the law is the establishment of the offices of the Babaloja and Iyaloja General at the State level which shall be rotated among the administrative zones.

The law stated that the Babaloja and Iyaloja shall be appointed from among the nominations from the seven administrative zones of the State by the market council and shall be ratified by the State House of Assembly.

The law provided that the Babaloja and Iyaloja are to foster peace and harmony, among various societies in all markets within the State, give advice to market councils in matters pertaining to markets and perform such other functions as may be required.

Speaker of the house of Assembly, Adebo Ogundoyin while speaking, explained that the law was aimed at regulating the activities of the market leaders council in Oyo State.