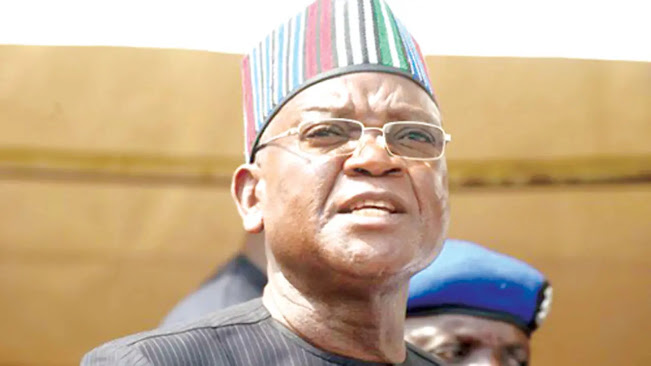 The youth group noted that the Governor has on more than one occasion clarified that he has nothing against Ayu.

According to them, Ortom believes that it is a matter of integrity for the PDP Chair to take the path of honour and quit.

In a statement signed by Comrade Philip Hundu, President of the group, they insisted that it is a moral burden on Ayu to resign, adding that the National Chairman made that commitment on his own to the northern caucus of the party that he will quit if a presidential candidate of northern extraction emerges at the convention.

They noted that Ayu should not have waited for anyone to remind him to step aside immediately after the emergence of former Vice President Atiku Abubakar as the party’s presidential candidate.

The youth association was responding to a press conference by the Abuja based nondescript Jamgbeh Development Association, insisting that Ayu is the architect of his current misfortune, adding that the embattled party Chaif has not lived up to the expectation by his poor conduct and bias in the administration of the PDP, before and after the national convention which produced Atiku Abubakar as the presidential candidate.

“It is public knowledge that Governor Ortom has represented the Benue people, Jamgbagh inclusive effectively and efficiently. I will continue to do so within the limits of available resources but we must at all times be men and women of honour and integrity,” the statement said.

According to them, it is unfortunate that the Abuja based Jemgbagh Development Association, JDA, who have never spoken out against the Fulani killings in their local governments have suddenly found their voice, speaking for the embattled national chairman of the PDP for clannish reasons.

“They are addressing a Press Conference but are not taking on key issues that affect the general well being of the people from their area,” Ortom said

“They did not call the press conference to draw the attention of the Federal Government and her agencies to the numerous security, infrastructural and environmental challenges facing Gboko, Buruku, and Tarka. They have merely engaged in emotional blackmail and futile defence of a morally-weakened National Chairman of the PDP, Senator Ayu.

“Unfortunately, JDA avoided taking an honorable stand on Ayu’s refusal to fulfill his own commitment. That would have given them the moral high ground. They wasted the opportunity. If you blindly support your kinsman right or wrong, you should lose the right to challenge outsiders when they wrong your community. You cannot be right only when it suits your selfish interest,” the Governor emphasised.

The group reasoned that JDA should instead support Governor Samuel Ortom in doing what is right for Benue, PDP, and Nigeria.

“The decision to withdraw support for Iyorchia Ayu is in the party’s best interest. It is in the best interest of Benue people to help PDP win, not lose. In case those fanning the clannish card of Jemgbagh and their sponsors are not aware, with Ayu as National Chairman, PDP will enter the 2023 election with a huge credibility deficit.”

The group said that JDA needs to come home and feel the pulse of the people rather than stay in Abuja to assume and pontificate on a subject they do not fully understand.

“Ayu must plead with the aggrieved leaders of the party for understanding or resign since that is what he committed himself to do at Bauchi State Lodge, Abuja where the Northern Caucus met and endorsed him. If he refuses, as he is currently doing, how can members of the party and indeed Nigerians trust the party’s National Chairman on the drive to rescue and rebuild Nigeria if his word is not his bond.

“Let it be known to Jemgbagh Development Association and their sponsors that Ayu’s democratic antecedents are not being called to question here. That is an irrelevant posturing. His resignation is a matter of principle, equity, and justice. Ayu has served the country well, and the country has been good to him too. Now he has an opportunity to do what is right by resigning and continuing to enjoy the respect of well-meaning Nigerians, within and outside Benue.

“His intransigence is a massive embarrassment to Benue and PDP. It will cost the party dearly. JDA those who share their concerns should advise Ayu to sacrifice for the party.

“Instead of whipping up emotional and clannish blackmail that Governor Ortom is pulling down Jemgbagh sons and by extension, underdeveloping the area, it is on record that the Governor has been fair to all parties and every part of Benue State in politics, infrastructural development and political patronage. JDA must note that Senator George Akume was voted out by the majority of voters, including those from Gboko, Buruku except for Tarka;his local government of birth.

“Senator Orker Jev will not be running to the Senate again because it has been the established tradition that an outgoing governor goes to the Senate to give the state an effective representation. Senator Akume replaced Senator Fred Orti while former Governor Gabriel Suswam, now Senator, replaced Senator Gemade. Even though he lost the first time, he came back to reclaim the position.

“Under the Ortom Administration, Gboko, Buruku, and Tarka local government areas have enjoyed high-profile political and other appointments.

“They have also enjoyed their fair share of infrastructural development – including the reconstruction of Ahmadu Bello way, Gboko, completion of the 37km Wannune-Ikpah-Igbor road, construction of choice Gboko township roads in Gboko like, Shaahu road, Martin Dent Road, Aper Aku road among many other projects various sectors.”