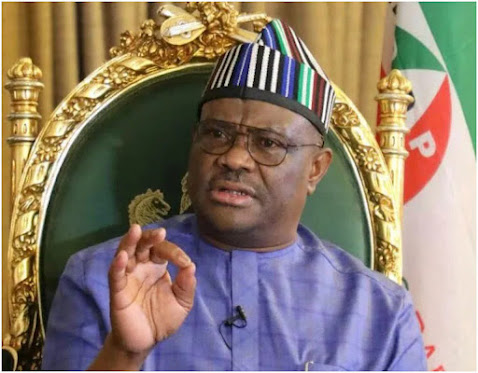 Amid the crisis in the Peoples Democratic Party, PDP, Governor Nyesom Wike has vowed to always fight for his beliefs.

Wike said he’s not a born-again Christian, hence would always fight back his aggressors.

He spoke during the birthday celebration of his Abia State counterpart, Okezie Ikpeazu.

According to Wike, he would blow off the head of anybody who slaps him.

“I told Ikpeazu; they said if they slap you turn the other side, but me, if you slap me here; I don’t know if I would survive the other side. So, I will blow your head off.”

Wike has been aggrieved with the PDP’s leadership following Atiku Abubakar’s emergence as the party’s presidential candidate.

With Atiku being PDP’s presidential candidate, Wike had called on the party’s National Chairman, Iyorchia Ayu to resign.

The governor argued that a particular region should not provide PDP’s presidential candidate and the National Chairman.

To this end, Wike, Ikpeazu, Governor Samuel Ortom of Benue State, and Governor Seyi Makinde of Oyo State have been pushing for Ayu’s removal.